Courtesy of Of Note

Shah and Mayer have cofounded Of Note, an influencer marketing agency specializing in micro- to mid-tier content creators. The agency was founded in January, just before COVID-19-related shutdowns took effect throughout the U.S.

The coronavirus pandemic has caused a massive work-from-home movement, for those who are able to do so, but Of Note’s business model stands in stark contrast to that movement. In late October, the company will open the doors to Note House, a 3,600-square-foot content creation studio for influencers based locally in Nashville, Tenn.

“What was missing in Nashville and other small cities around the country was an easy way for big brands to connect with the influencer population,” said Shah, who, along with Mayer, is an alumna of The Callaway, a Nashville-based public relations and marketing agency founded by former New York Post fashion editor Libby Callaway.

Based in the East Nashville neighborhood, Note House is currently undergoing a gut renovation. Its layout is expected to include a living room, a video studio, a fashion studio, a podcast studio, a kitchen, a dining room and a bedroom suite. There is also a backyard and a second-floor coworking space that has a private office.

“What we hear a lot from influencers is they might have good influencer friends, but for the most part, they exist on an island [and] don’t have a lot of networking capabilities,” Mayer said. “Say they’re meeting with a brand and they want a more professional space to meet rather than going to a coffee shop. They can rent that out.”

Unlike TikTok houses, Note House will not have full-time residents and will operate on a membership model. Influencers apply to be members of the house. Once approved, they can book rooms in which to create content.

Already, Note House has 26 members and a growing roster of brand partnerships.

Of Note brokers Note House’s brand partnerships, which include companies such as Powell Architecture and Building Studio, a sponsor of Note House’s renovation. Because of its layout, the house could easily attract sponsors in a variety of categories such as dinnerware, cookware, bedroom linens, beauty and fashion. The draw: Note House influencers are required to tag five brand sponsors per month as part of their membership.

“We don’t promise it’s going to be an ad for the brand, we more [so] want brands to know they can get beautiful content from us,” Shah said. “They could come away from a partnership with Note House with 30 pieces of content.” 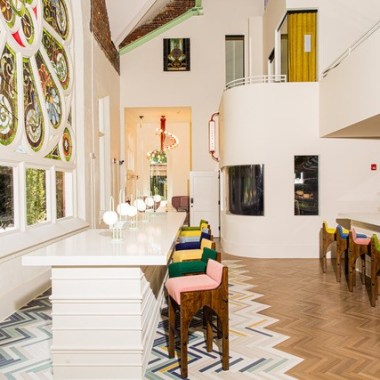 A sample of Powell Architecture and Building Studio’s prior work.  Andrea Behrends

Note House influencers are allowed to have partnerships with brands not in Of Note’s Rolodex, though the agency is positioning itself to broker relationships between brands and influencers down the line. Coronavirus willing, Of Note plans to open future Note Houses in cities such as Austin, Tex., and Phoenix, Ariz.

The decision to work with micro- to mid-tier influencers stems from the trend toward microinfluencers, who have proven to be more relatable than superinfluencers during COVID-19. Influencers with smaller followings are also more likely to need the kind of facilities Note House offers. Additionally, partnering with influencers early in their careers presents growth opportunities for Of Note.

Are Influencers the Escape Social Media Wants During Coronavirus?

Brands Turn to Microinfluencers as Supers Struggle With Relatability

Influencers Are Losing 33 Percent of Their Income to COVID-19