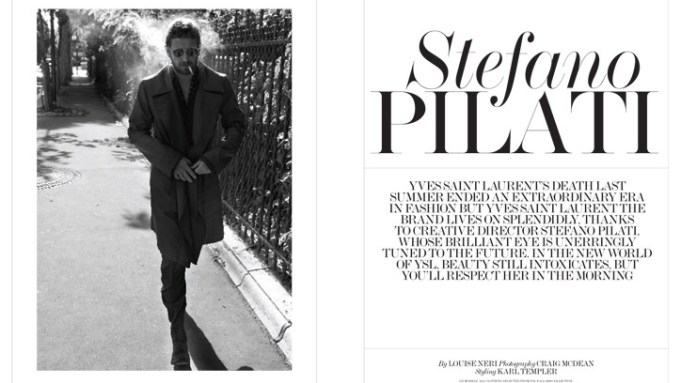 OLD IS NEW AT INTERVIEW: After a springtime of transition, Interview will unveil a thorough makeover in the September issue with a new logo, layout, paper stock and trim size and even a special foil and ink-treated cover. And if readers still don’t pick up on the improvements, the phrase “It’s New, Pussycat!” emblazoned on the cover should do the trick.

“The best description here is not a repositioning of the magazine,” said Brant Publications chairman Peter Brant, who in January purchased the remaining share of the company owned by his ex-wife, Sandra Brant. “The magazine has a great history and we want to stay as close to that history as possible. But what we’re trying to do is to make it more elegant to suit who we think the reader and advertiser are, and make it more perfectly put together in design so it has more value.” The result is an overall richer-looking magazine with a cleaner layout.

Editorial director Fabien Baron said Interview, launched nearly 40 years ago by Andy Warhol, reflects how magazines can be a higher-quality counterpoint to the “throwaway products, reality TV and point-and-shoot images” that are present in media today. “It’s time for a magazine to have well-executed visuals to counterbalance the culture of point-and-shoot,” he said. “Quality needs to be put into magazines today, otherwise there will be no reason for magazines to exist.”

“It comes back to the idea that there have always been certain titles that people have collected, not just use a magazine for a month and then throw out, but have actually kept,” said Bollen. “We thought about Interview as one of those magazines.”

September is the fashion issue. Photographers who contributed to the issue include Mikael Jansson, Craig McDean and David Sims. Mert Alas and Marcus Piggott shot Kate Moss for the cover, the first time the duo has worked with the magazine. Moss is interviewed by O’Brien, as is painter James Nares. Conversations between writer-directors Woody Allen and Doug McGrath, and Yves Saint Laurent creative director Stefano Pilati and art critic and curator Louise Neri are also included.

“If you look at Interview from the Eighties, there was a broad range of subject matter. We’re trying to expand our palate in terms of the people we’re interviewing,” said O’Brien of a time when, coincidentally, he was a contributing editor and columnist for the title before Sandra Brant and former editor in chief Ingrid Sischy took over. “[We have] Maison Martin Margiela interviewed by Joseph Kosuth. So it’s the father of contemporary conceptual art interviewing the father of conceptual fashion.”

The magazine added new sections, including Capture, where stylists and photographers capture on-the-fly images on their cell phones; Agenda, a news page; a home section, and the Interview Back Page, a flashback to articles from the archives. The first is an interview with Christy Turlington when she was 16 years old.

An enhanced Interview.com site, complete with audio and video interviews and an archive of content dating back to when Warhol was alive, will launch in October.

All the changes don’t come cheap, though: The magazine will increase its cover price to $3.95 from $3.50, although it’s also expanding its distribution by increasing its draw by 30 percent in the U.S., and adding 450 newsstands, or double its previous number, in the U.K. Colette in Paris started carrying the title this summer, and will promote the September issue in the stores with windows and merchandising.

The September issue, which hits newsstands on Aug. 26, carries 142 pages of advertising from clients including Rolex, Raleigh Hotel, Chanel, John Varvatos, Graff, HBO, Michael Kors and Missoni. French Connection bought the back cover. Andrea Hyde, president of French Connection Holdings Inc., said Baron, whom French Connection has worked with in the past, was compelling enough to be a part of the magazine’s fashion issue. The June-July and August issues may be indicative of the buzz the revamped Interview is generating — those issues, the first the new creative team oversaw, were Interview’s best-selling issues in the past 10 years. Interview has an average circulation of 221,000. — Stephanie D. Smith

UNITED BENETTON: Never one to avoid controversy, Italian clothing retailer Benetton on Friday took out double-page advertising spreads in a number of leading news dailies worldwide, showing a Tibetan monk and a Chinese soldier praying face-to-face under the word “Victims.” The image, which coincided with the opening day of the Beijing Olympics, was part of the 74th edition of Benetton’s Colors magazine, which “attempts to make a small contribution to dialogue and engagement between Tibetan and Chinese people,” according to the company. “Benetton isn’t taking a position [on the Tibet-China situation],” a Benetton spokeswoman said. “The idea is to leave the image open to interpretation.” The Colors magazine, which hit newsstands in seven languages this month, includes 30 photos of the recent Sichuan earthquake and 30 prayers by Tibetan monks for the Chinese victims. Benetton’s Asia Pacific office is supporting the Red Cross in providing aid to the survivors of the earthquake. T-shirts bearing the Tibet-China image, which was photographed by the company’s in-house creative department, are available in Benetton megastores. — Andrew Roberts

OLYMPIC SEAMS: Benetton isn’t the only company aiming to capitalize on the Summer Games, of course. On Tuesday, In Style China will provide a guide to Asian fashion when it will host a fashion show on NBC’s “Today” show from Beijing. The segment will showcase looks from six leading Chinese designers: Han Feng, Shiatzy Chen, Qui Hao, Ma Ke, Xie Feng and Uma Wang. (One of Xie Feng’s is a sporty silver nylon dress inspired by this year’s games). In Style will use Chinese models to walk in the looks (sorry, Meredith Vieira and Ann Curry). Fashion and luxury brands continue to expand into China’s growing upscale market. At the same time, designers from the region also are receiving more attention from the mainstream market — Ke was the first Chinese fashion maker to present a collection during the June couture shows in Paris. Next month, Xie Feng and Chen will show collections in Paris. In Style’s Chinese edition was launched last month with advertising from Louis Vuitton, Tod’s, Chanel, Lancôme, Dior, Hermès, Givenchy and Adidas. The fashion and beauty pages of the issue are produced locally, but between 30 and 40 percent of the issue’s content is picked up from the U.S. edition. — S.D.S.

A STRONGER FIBER: After years of working under the shadow of other big brand names, Dow XLA is stepping out on its own with its first solely branded advertising campaign. The ads will feature looks from consumer partners such as Citizens of Humanity and Calvin Klein — but the provocative images are intended to highlight the Dow XLA stretch fiber brand’s position in the fashion world. “We feel that the Dow XLA brand has reached a new level and gained acceptance among powerful, industry-leading brands as the premium fiber of choice,” said Holly Watson, global brand communications manager for Dow Fiber Solutions. The campaign will involve print, TV and the Web. Watson declined to provide the cost of the campaign, which was shot by fashion photographer Henrik Halvarsson in New York and will run in the U.S., Europe, South America and Asia. — Amy Wicks