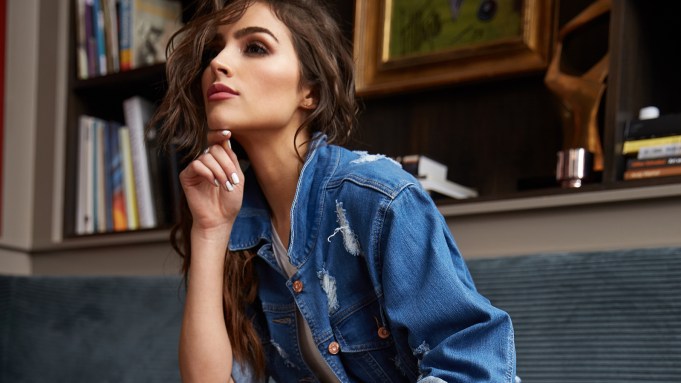 Through her Miss Rhode Island, Miss USA, Miss Universe trajectory, Olivia Culpo is now better known as a beauty-fashion-lifestyle influencer than the classically trained cellist she is.

While she did a few tracks for Snoop Dogg (“who knows where those went”) Culpo said she wishes she had the time to join an orchestra or quartet just for kicks. Over the holidays, she and her fellow-musician mother performed with the Boston Pops “because they just randomly handed me a cello and told me to play with them,” she said. “It’s definitely something that I love. I really appreciate that I have that skill and that out for myself whenever I need to forget that the world is existing.”

Having recently been shot by Ellen von Unwerth for Rampage’s spring campaign, Culpo said she liked the fact the brand’s jeans retail from $20 to $50. Wearing a Texas tuxedo, a Rampage jean jacket and jeans during an interview at the HGU Hotel here, she said the campaign had a lot to do “with having fun — we baked cupcakes, threw popcorn at the screen, drank milk out of straws in that very cheeky kind of Nineties throwback way to all the milk commercials.”

Painting the scene at the Los Angeles shoot for the Iconix-owned brand, she said, “When we went out to the pool, there were green palm trees, the blue pool, pink floaties. We weren’t taking it too seriously. My hair was huge, my lips were drawn up to my nose almost — I just felt like a different person. That was Ellen’s vision.”

Along with helping her pal Gigi Hadid with “a top-secret project,” during New York Fashion Week, Culpo offered her boyfriend, New England Patriot Danny Amendola, tons of pre-show advice before his runway walk at Philip Plein’s show. “He said, ‘Where should I look? Should I look at you?’ I was like ‘No, don’t look at anybody. Look straight ahead. Just listen to the music. Think of a mantra that kind of resonates in your head with what you see the collection as.’”

So excited to catch the shows in Paris, Culpo singled out Giambattista Valli as last year’s favorite since Hadid walked the runway. “We’ve been friends for a while just because of the business and seeing each other at pretty much everything,” Culpo said. “The last time we hung out together we just laid in bed. We were so tired. We’re either so tired or she’s really creative. What we did this week was very creative. She’s showing a different side to herself; she’s just a nice normal girl.”

As a Pencils of Promise global ambassador with Shawn Mendes and Justin Bieber, Culpo also liked the fact that some proceeds from the sales of a boot Hadid designed for Stuart Weitzman are benefiting the charity.

Her Oscar night plans will also be charity-driven through an alliance with Marchesa, Stella Artois and Water.org. Culpo will wear a Marchesa gown made of beads that were made from limited-edition Stella Artois chalices to raise awareness about the global water crisis. For every chalice that is purchased, five years of clean drinking water will be provided to someone in a developing country. “That’s just one way how fashion can help for the greater good,” said the L’Oréal League member.

With 1.6 million Instagram followers and counting, Culpo is keeping the increasing intrusive glare of fame in check. “Actually, if anything, you almost become better at knowing how to be yourself. Because you constantly have people telling you to be one way and you know that doesn’t feel right. At those moments you have to choose between hopefully staying true to yourself or losing yourself,” she said. So “when you do put your life out there for people to judge, they totally will. You have to remember what’s true to you rather than what people are going to tell you is true to you.”