Former Miss USA Olivia Culpo has signed on as Rampage's newest ambassador and will appear in its fall ad campaign. 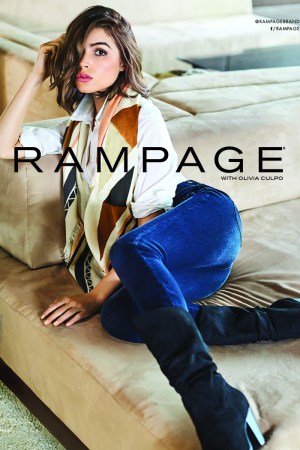 The Rampage campaign was shot by Mark Andrew last month in a Brooklyn penthouse and features the label’s footwear, denim, handbags and other accessories. Aimed at women 18 to 32 and sold in Macy’s and Belk, Rampage has been a leading juniors and young contemporary resource since its launch in 1982.
Licenses also include outerwear, legwear, intimates, watches, jewelry, eyewear, cold-weather accessories and home items.

“This is really exciting. I loved working for the brand and am really flattered they chose me along with Gisele, Bar and Chrissy,” Culpo said. (Maybe she’s taken a page out of Bündchen’s playbook: After dating Nick Jonas, she’s reportedly moved on with New England Patriots wide receiver Danny Amendola.) While Culpo said she got to wear “a lot different things” for the shoot, the focus was on skinny denim with embellishments and booties. Her favorite look was a denim dress with lace-up detail on the patch pockets. “It’s a really good segue from summer into fall, and it’s a good look for me,” she said.

Rhode Island native Culpo has spent her summer vacation time in Guatemala, where she is an ambassador for the kids’ education charity Pencils of Promise. She’s also traveled for L’Oréal, where she also has a beauty deal. This fall, she’s gearing up to shoot her second major film, still under wraps, in Texas. Her first movie, “The Other Woman” starred Cameron Diaz, Leslie Mann and Kate Upton. She’s also filmed “American Satan” with Denise Richards this year.

But for Culpo, fashion is never far from her mind. “I’m looking forward to New York Fashion Week in September. Every year I have a new hit list. This year, I’m going to Zac Posen and Marchesa. I just wore a really great Marchesa outfit and I also love Georgina [Chapman, Marchesa cofounder].” She is excited to check out other showgoer’s street style as well.” Even more than the designers, I love the energy of New York Fashion Week and the people walking around. Everyone’s taking their fashion to the next level and I just love it.”