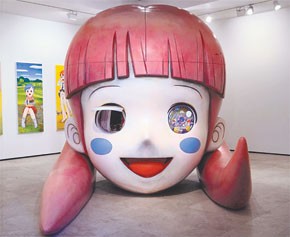 LAST CALL: Manga fans only have two more days to check out the Mr. exhibition at the Lehmann Maupin gallery in Manhattan. The cartoonish candy-colored paintings and huge sculptures by the Tokyo-based artist, who uses Mr. as his moniker, are testimony to his fondness for otaku, a term used to describe the generation obsessed with manga, the Japanese word for comics and print cartoons, and anime, an abbreviation for animation that can be hand-drawn or done with a computer. The inaugural New York Anime Festival will be held Dec. 7 to 9 at the Jacob K. Javits Convention Center.

The term otaku became more a part of the Japanese vernacular in 1989 after a serial killer was caught and turned out to be a recluse obsessed with pornographic anime and manga.

Mr., who was born in 1969, is part of a generation that relishes the culture of collecting — something that teenagers and college students are too young to appreciate, said a Lehmann Maupin spokeswoman. His paintings include a garter-wearing prepubescent maid and a knock-kneed girl in a panty-exposing pose — apparent references to his Lolita complex, or what manga and anime followers refer to as being a “lolicon.” A few of his images are being used for the underbelly of skateboards being produced by Supreme this fall. More intriguing are the gigantic hand-painted fiberglass sculptures, especially the one of the pink pixie-haired girl with a little vignette painting in each eye to hint at what is going on in her mind. Not everyone sees the dark side of Mr.’s work. Cynthia Rowley attended the opening with her daughters. — R.F.

STRANGE BUT TRUE: Oana Felipov’s videos have been shown at the Tate Modern in London and the Renaissance Society in Chicago, but her handiwork can be seen in homes across the globe. The Bucharest, Romania-based artist first created what she calls “the friendly octopus,” essentially an oversize stuffed animal, for a friend who said he needed someone to hug. What started as a friendly gesture has become a company called Karakiri. Once orders are placed via Karakiri.com, Felipov e-mails buyers to see what color, materials and sizes they would like. While each creature is being made and attending what the artist calls a two-week kindergarten class, e-mails are sent to the new owners explaining the lessons being learned and counting down the days until their creatures arrive. Inevitably, Karakiri buyers have bonded online through blogs, sending in photos of themselves with their new nonbreathing pets and reminiscing about their adventures. — R.F.

AT THE COOP: A swivel-head flashlight, a 1940 walking stick with a rollout map of Boston and Corning Glass Work’s glass-bodied “Silver Streak” iron, which was developed during wartime metal rationing, are among the artifacts in “IDEO Selects: Works From the Permanent Collection,” an exhibition at the Cooper-Hewitt National Design Museum in Manhattan.

The Palo Alto, Calif.-based design firm IDEO is the fourth guest curator to have a run at the museum’s collecting departments. After months of sifting, IDEO executives have selected 30 works from the 16th century to the present that highlight how a designer solved an everyday problem.

Some require close inspection, such as the “Vernaid Bandage,” which has printed illustrations and simple directions for binding and dressing a variety of wounds and injuries. IDEO has pulled together texts, questions and graphics that ask museumgoers to consider each object’s inspiration, intuition and empathy in order to get a better sense of the designer, his or her work and the context in which it was created.

There also are more playful pieces, including Ladislav Sutnar’s city-inspired “Build the Town” toy blocks and car prototype, as well as Charles and Ray Eames’ child chair, which was among the first pieces of molded plywood furniture to be mass produced. The exhibition runs through Jan. 20 at the Cooper-Hewitt, 2 East 91st Street. — R.F.