The 27-year-old model, who is also a violinist, has written his very first composition for the magazine, Watch editor Jeremy Murphy told WWD. 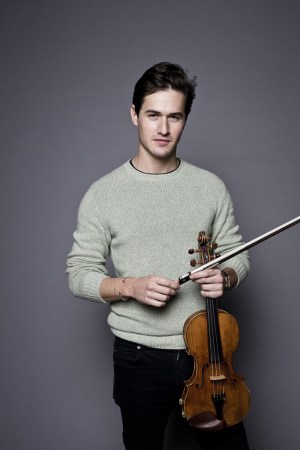 ONE TO WATCH: CBS’ Watch magazine has found its next muse.

The bimonthly glossy lifestyle pub has nabbed Charlie Siem, the face of Giorgio Armani’s Eau de Nuit fragrance, for a new campaign. The 27-year-old model, who is also a violinist, has written his very first composition for the magazine, Watch editor Jeremy Murphy told WWD.

Siem performed that song along with a 22-piece orchestra on Dec. 20 in London at Saint Silas in Kentish Town. The song, which was produced by the magazine and Saatchi & Saatchi’s Team One, was scored to video from Watch’s photo spreads by Patrick Demarchelier, Ellen von Unwerth, Art Streiber, Gilles-Marie Zimmermann, Pavel Havlicek and Kieron O’Connor, among others.

A rollout of the video-driven campaign is expected to appear on CBS digital platforms — such as video-on-demand and social media — in March.

Murphy said he got to know Siem after he was featured in one of the magazine’s stories in June. From there, Siem performed for Watch’s sponsors last year and at a charity function in March.

Siem, whose fourth album for Sony Records will be released next year, has also modeled for Dunhill, Dior and J. Crew. In addition, he appeared in Karl Lagerfeld and Carine Roitfeld’s book “The Little Black Jacket: Chanel’s Classic Revisited.”