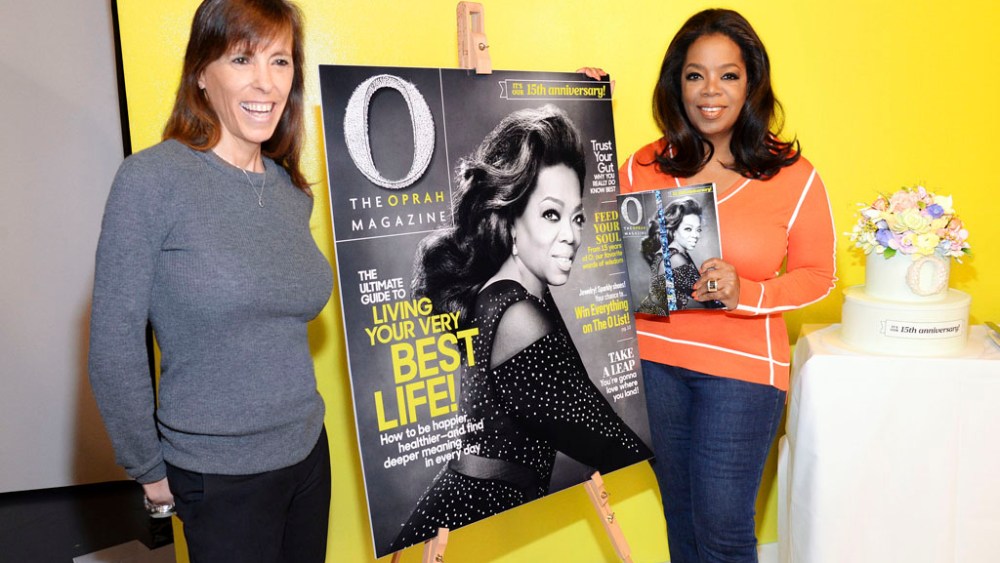 OPRAH’S 15 YEARS: A small group of photographers, editors and other creative types huddled around a large cardboard rectangle propped up on an easel, waiting for Oprah Winfrey to emerge from her green room, following a daylong shoot at Chelsea Piers in Manhattan, during which she posed for three covers of O, The Oprah Magazine.

The occasion was the unveiling of O’s May cover, which marks the Hearst Magazines-owned title’s 15th year. The crew huddled around Winfrey, who gave a brief thank you toast, and then said: “I won’t say 15 more [years]. Fifteen more of dragging me out, I don’t think so.”

She was then handed a drink and directed to look at the shrouded cardboard depicting the cover.

“I wonder who’s on it,” Winfrey gasped, feigning surprise, as the sheet was lifted. Glassman revealed a black and white image of Winfrey, wearing a black dress adorned with crystals. The cover’s “O” logo was also encrusted with crystals. (For those sensing a theme, crystals mark a 15th wedding anniversary.)

Fifteen premier members of O’s Circle of Friends could win a copy of the magazine, which would both be signed by Winfrey and adorned with actual Swarovski crystals — more than 1,500 an issue to be exact. In order for those members, who pay an annual fee of $199 to be part of the premier Circle, to be selected, they must write a short paragraph on “what makes you shine.” O’s editorial staff will decide the winners.

The issue, which hits newsstands on April 14, includes 15 chapters or mini-sections that play on some of Winfrey’s mantras. For instance, one chapter is called “It’s Never Too Late,” and explores the career changes of successful women. L’Oréal bought the double ad flap for its Lancôme brand that opens the cover. The issue, which had a 50 percent increase in revenue, also features a 12-page hair guide sponsored by the L’Oréal brands Carol’s Daughter and Softsheen, as well as ads from Dior, J.C. Penney and Dove.

But back to Winfrey, who alluded to a topic that is front of mind of any reader who picks up the magazine: What will happen when she stops appearing on the cover and, more pointedly, can it survive without her?

“I do not see myself on the cover for the next 15 years. We actually seriously considered it. We made the decision not to do it now,” Winfrey said, referring to her self-imposed slow-fade from appearing on the magazine’s monthly cover.

“Oprah is all in,” Kaylin said, explaining that Winfrey would still be in the magazine, just not always on the cover. “She’s in love with this magazine. She’s here for us. It’s only human and appropriate for magazines to change it up, so she doesn’t have to be on the cover for the end of time.”

At 61, Winfrey is in a different chapter in her media career with her television network, OWN, beginning to rebound recently with strong ratings from Tyler Perry’s shows “The Haves and The Have Nots” and “If Loving You Is Wrong,” and her film career as a producer developing at a faster clip. But Winfrey emphasized that the magazine still plays a vital role in the building of what people at Hearst call her “super brand.”

Still, at a time when print isn’t exactly the most vibrant element of the brand — O’s newsstand sales in 2014 totaled 298,980, down 49.8 percent since 2010, and its total paid and verified circulation slid 2.9 percent in four years to 2.4 million — Winfrey is sticking to her guns. “We’ve seen the advertising sales landscape, the financial landscape change for everybody actually, in the business. But our number-one intention is being connected to the reader, which is really the force behind the reason why I started the magazine,” she said, adding that Hearst editorial director Ellen Levine was instrumental in getting her on board 15 years ago.

Levine’s pitch was simple: there’s a pass-along readership for women with magazines that isn’t as common for books, which Winfrey loves.

“With print, you have a keepsake. We had to convince her that there was a reason this was important,” said Levine, who almost evangelized Winfrey for her “inspiring, authentic” manner. “She had the TV show and 25 million viewers. When she went off screen, it felt like you lost her.”

That aside, Levine had also keenly observed that whenever she put Winfrey on the cover of Hearst’s Good Housekeeping magazine, it would sell out every time.

Michael Clinton, Hearst Magazines’ president, marketing and publishing director, noticed as well, adding that over 15 years, the magazine has pulled in $1 billion in consumer revenue from subscriptions and newsstand sales.

“There’s only one Oprah Winfrey, which is by nature a differentiator. Oprah was always a big presence in culture,” said Clinton, who acknowledged that when the talk show went off the air in 2011, the magazine dropped 19.5 percent to 479,763, according to the Alliance for Audited Media. The newsstand never fully rebounded from that, although circulation did level off. For growth, Clinton and his team at Hearst are hoping to tap into “all things Oprah,” meaning Winfrey’s diverse media portfolio.

But Winfrey’s relevance to a younger generation is also key in determining how the magazine will grow, to which Clinton responded: “It’s less about age with Oprah and more about the message she has.”

Back in her green room, Winfrey — who rested her feet on a coffee table as she reclined on a black leather sofa — tackled the question of her magazine’s reach and relevance to the younger generation. “I think we do speak to all ages, but the emphasis is, unlike everybody else who is chasing the Millennials, we are not chasing the Millennials,” she offered. “I think we try to speak to the heart of the woman who we know is interested in growing into herself. Obviously, I think that, the idea of reaching young girls that are in college is something that we are strongly open to because who better wants to know how to live a more purposeful life than people who are starting out? But what we really try to concentrate on is the heart of our reader.”