The talk show queen was presented with the honor at the third annual DVF Awards at the United Nations on Friday night. 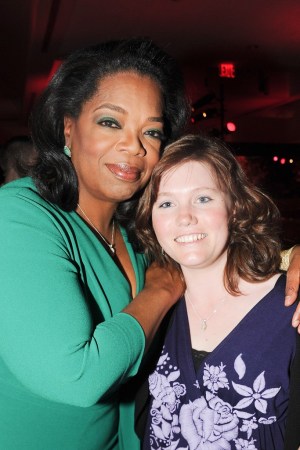 OPRAH’S TURN: It was a big weekend for Oprah Winfrey. Before her interview with Whitney Houston’s daughter, Bobbi Kristina Brown, aired Sunday on OWN, the talk show queen was honored by Diane von Furstenberg and Tina Brown at the United Nations on Friday night at the third annual DVF Awards. DVF typically refers to the designer but on this night, it stood for Diller-von Furstenberg, since the ceremony was an effort between the designer and her husband, Barry Diller.

Winfrey was presented with the lifetime leadership award and joined honorees Jaycee Dugard, Layli Miller-Muro of the Tahirih Justice Center, Panmela Castro of Rede Nami and Chouchou Namegabe of the South Kivu’s Association of Women Journalists.

The DVF Awards are given to women who demonstrate “leadership, strength and courage in their respective fields.” Winfrey has donated more than $40 million to fund the Oprah Winfrey Leadership Academy for Girls in South Africa. “I was asked earlier what inspires me,” said Winfrey, standing on a pink-lit stage in the U.N. cafeteria. “It was when I first figured out that I could use television and not just let television use me. That was the shift for me.”

After accepting her award, Winfrey presented one to Dugard, who received the loudest applause of the evening. “When I saw her interview with Diane Sawyer — first of all, I wanted to do that interview — but if I couldn’t do it, I wanted Diane Sawyer to have it,” said Winfrey, looking at her journalist friend, seated in the crowd.

Jessica Alba, a fixture at awards ceremonies these days, made her way backstage shortly afterward, to give von Furstenberg a big hug. “You were amazing,” the designer said, while munching on some vegetables. Alba had presented Castro with an award.

Later, von Furstenberg talked about getting Winfrey involved in the evening. “It’s not easy. She’s very busy and I asked her last year but she couldn’t,” said von Furstenberg. “I woke up this morning and wrote my speech for her at 5 a.m. I had to think about it a bit. It needed to incubate with me for a while. This was so humbling.”