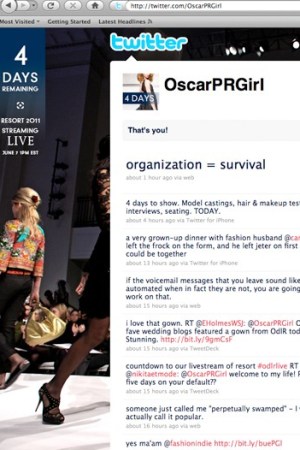 Oscar de la Renta is taking the plunge: On Monday at 1 p.m., the designer’s 2011 resort runway show will broadcast in real time on the company’s live-stream channel.

Here, de la Renta talks to WWD about his decision to go live and unedited, the brand’s quirky Twitter personality, OscarPrGirl, and his new iPad.

WWD: What made you go the live-stream route?
Oscar de la Renta: Without a doubt, the role of a runway show has changed. In the past, the show was principally for buyers. While they are still a key constituency, we also show for the media. Online media is increasingly influential in fashion. This allows that group and others that can’t attend in person to see things in real time. It’s evolution.

WWD: What do you think the benefit of this is?
O.D.L.R.: A show is the greatest source of brand content that you have, and to be able to share it on such a large scale — it’s really amazing. I think that this is where the real power of the Internet lies, allowing anyone anywhere to interact with your brand, shifting what has traditionally been kept private to the public space. I suppose it’s a bit like adding more seats to the venue.

WWD: Is this something you plan to implement into your company’s permanent social-media model?
O.D.L.R.: We’ll see. For Monday’s show we have partnered with Web sites and blogs in our key markets who will host the show live for their readers.

WWD: What effect has social media had on Oscar de la Renta as a company? And on the fashion industry as a whole?
O.D.L.R.: The great thing about fashion is that it always looks forward. I would be lying if I said that we understand the complete picture and the long-term effects that social media will have on our company. Right now, we feel strongly that we have to be a part of it. You have to experiment, and our hope is that eventually we will get it right.

WWD: Your brand has one of the most active Twitter accounts in the industry — OscarPrGirl has become a celebrity in the fashion Twitterverse. Can we expect to see you tweeting anytime soon?
O.D.L.R.: Although I have no plans to tweet, I am fascinated by developments on the Internet. I’ve just ordered an iPad — I have to wait 10 days. I think that it will really change the way I read.