The designer took out a full-page ad in Women’s Wear Daily to publish an “open letter” ad that took the critic to task for calling him a hot dog. 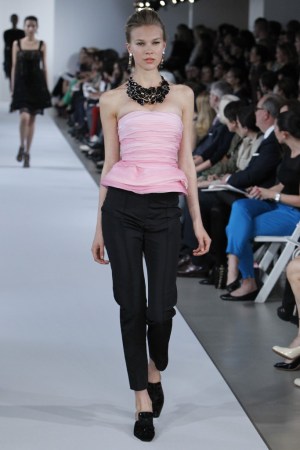 OSCAR’S NOTE TO CATHY: Oscar de la Renta took out a full-page ad in Friday’s edition of Women’s Wear Daily to publish an “open letter” ad that took Cathy Horyn to task for calling him a hot dog and alleging he copied Raf Simons’ styles at Dior in her review of his show last week. Margaret Sullivan, The New York Times’ public editor, weighed in Friday afternoon on nytimes.com. “There undoubtedly is a line of personal criticism that a writer shouldn’t cross when describing an artist or designer — though that line is pretty far out there when you consider the benefits such figures gain from their celebrity status,” Sullivan wrote. “Ms. Horyn’s review didn’t even come close to the line.”

It will come as no surprise that Horyn is in agreement. “The term was used in a professional context, as in someone showing off his tricks, like an athlete,” Horyn told WWD. “As for the ad, it seemed a bit over-the-top.”

But de la Renta still stands by his statements in the ad, which said that if Horyn could call him a hot dog, he could call her “a stale 3-day old hamburger.”

On Friday, the designer said he had received numerous calls of support and one big bouquet of flowers. He added that blogs and Twitter were trending overwhelmingly in his favor. As for Horyn’s and Sullivan’s assertions that de la Renta misinterpreted what was intended as a positive review, he begged to differ. “Ninety-nine-point-nine percent of the people who read it read it the way I read it,” he said.

De la Renta restated a point he made in his letter, that he has no issue with negative criticism per se. “I don’t care that Cathy gave me a bad review,” he said. “Journalists — either you like it or you don’t like it, and you have to do your job as a professional. But you have to behave like a professional.”

The designer did take umbrage with Horyn’s assertion that he had been influenced by Simons’ Dior couture show, particularly his peplum bustiers. “Mr. Simons showed his with cigarette pants. Mr. de la Renta went with shorts,” Horyn wrote. De la Renta pointed out that he showed a peplum bustier over cigarette pants for resort in May; Simons presented his couture in July.

Asked if he might ban Horyn from future shows, de la Renta offered an immediate no. “I’m not going to make it that important.”