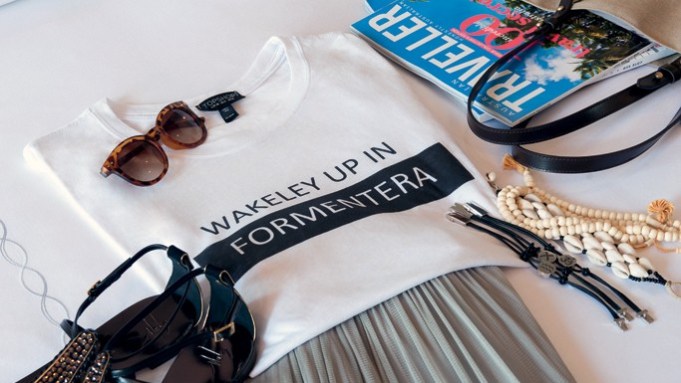 OUT OF THE CLOSET, ONTO THE BED: Welcome to a world where successful fashion ad campaigns no longer need models, edgy photographers, dedicated sets or studios. In a bid to connect more with its audience, the British fashion brand Amanda Wakeley has started shooting outfits laid out on a bed — with accessories pulled from other brands or from employees’ or interns’ closets — and constructing a narrative around the look.

“On the Bed,” which launched in April on the brand’s Web site, and via Facebook and Twitter, has showcased “One Dress, Three Looks,” or the same long dress styled for morning, noon and evening in Saint-Tropez; “Meeting the Bankers” at J.P. Morgan in Geneva; and “Charity Gala” in New York City. Each look features a Wakeley piece at its core, styled with pieces from such brands as Jimmy Choo, Uniqlo, Myla — and nail polish bottles, magazines, perfume and lingerie.

“We wanted to put Amanda Wakeley’s clothes in a more lifestyle-driven context,” said Sagra Maceira de Rosen, the company’s new chief executive officer, and a former head of the luxury goods equities team at J.P. Morgan. “The visuals capture a ritual of many women: Laying down clothes on the bed before getting dressed. It explores how, why and where to wear Amanda Wakeley in different daily life situations.”

Sometimes the shoots take place at hotels, such as Claridge’s or The Goring, other times, the executive has offered up her bed at home — in addition to the shoes and accessories in her closet.

Maceira de Rosen said the campaign was not launched as a commercial venture, but the showcased looks are notching 90 percent sell-throughs both online and at the brand’s retail outlets. She added that the products featured in “On the Bed” now account for close to 20 percent of all retail sales. The latest “On the Bed” breaks this week, and is dubbed “Summer Escapades.” It features pieces from the pre-fall collection, which the company says is fit for resorts ranging from Formentera, Spain, to the Hamptons, N.Y., to Bodrum, Turkey. Of late, customers have even started to send in their own snaps, which will be featured — along with the official ones — in a book to be published in spring.