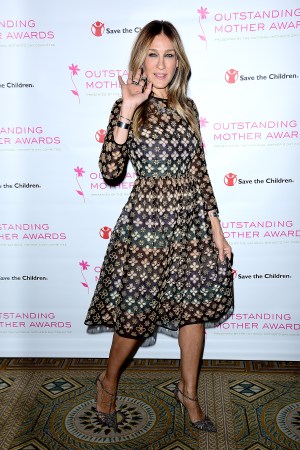 NEW YORK — If there was any conclusion at the 38th Annual Outstanding Mother Awards Thursday, it’s that there’s no such thing as balance.

“I think we should drop the pretense that anyone has any balance,” said the event’s emcee Joanna Coles, editor in chief of Cosmopolitan, before the formal program began. “A dark humor runs through this room how near everyone is to dropping everything on the floor.” She told WWD that when she won the award last year, her 14-year-old son was incredulous and said he should have intervened. “Why didn’t they call me?” he asked.

This year’s honorees were Louise Camuto, chief creative officer of Camuto Group; Gemma Lionello, executive vice president, general merchandise manager, beauty at Nordstrom; Joy Mangano, inventor and entrepreneur, and president of Ingenious Designs LLC, and Sarah Jessica Parker, actor, producer and businesswoman. Held at The Pierre Hotel, the luncheon raised over $500,000 for Save the Children’s U.S. programs. The program included an auction, where the biggest money-maker was two tickets to “Hamilton,” which went for $6,200, thanks to Michael Clinton, president for marketing and publishing director of Hearst Magazines.

Parker, who has won four Golden Globe Awards, three Screen Actors Guild Awards and two Emmy Awards, said she felt totally undeserving of the “Outstanding Mother” award. (The actress caused a social media sensation earlier this week when a blogger criticized her “Hamilton” outfit that she wore to the Met Gala and Parker came back swinging. She didn’t mention the brouhaha in her acceptance speech, nor was she giving any interviews). When she got the e-mail from Cole asking her if she would accept this award, Parker said she begged the editor and the people in charge to reconsider and find another mother who was more deserving.

Parker, who has three children, said she has many parenting fears, among them that she’s impatient, exacting and often on a set or in a meeting, she’s occupied by her “Blackberry, yes, a Blackberry,” when she should be picking up or dropping off at school, making dinner or hosting a play date. She said she wanted to dedicate her award to the millions of women who don’t have the support she has, who don’t have the resources to allow them to work outside the home, who live paycheck to paycheck and who don’t have the liberties she has to choose to work. “You are the heroes and I accept this on your behalf. You are the outstanding mothers of this year, of last year and next year, and I thank you for allowing me to honor them,” said Parker.

In accepting her award, Camuto said she used to be torn between motherhood and her responsibilities at work, but her late husband, Vince Camuto gave her wise advice to “believe in doing everything with passion.” He said that if she came home happy, she would bring happiness to her children. Camuto said that she can’t imagine her life without her two step-sons and son, and has enjoyed watching them grow from a guys’ perspective. “To my children, you give me life,” she said.

Lionello called the award “one of the most meaningful awards in my life.” She said that because of her career at Nordstrom she’s had to move her family 11 times. “They’ve never made me feel bad about it, and have been supportive and always say it’s a great experience.” She said that every woman who is trying to raise children with a demanding career “feels that kind of pressure.”

Mangano, whose breakout success was the Miracle Mop and went on to invent many different products such as Huggable Hangers and Forever Fragrant, was the subject of a major motion picture, “Joy” starring Jennifer Lawrence. When she took the podium, she said that she actually made the glasses she was wearing. She said she’s always asked how she balances being a single mom of three with a busy career and replies, “I don’t balance anything. When I hear the word, ‘balance,’ I see plates spinning around.” Mangano doesn’t believe in segregating her life into parts. “I threw balancing out the window, I even threw blending out. I fuse everything now,” she said. Mangano said she learned from her mother and grandmother to have the courage to believe in oneself. “You’ll be amazed at what can be done every single day,” she said.