The travel-heavy lifestyle magazine is going biannual with a definite global spin. 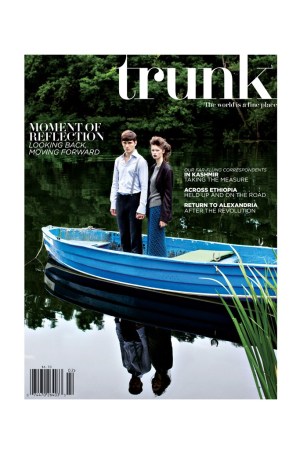 PACK THE TRUNKS: Somewhat cerebral — if you can say such a thing about a travel-heavy lifestyle magazine — Trunk is going biannual with a definite global spin. Until this fall, the publication was a once-a-year deal that was distributed in six countries. But through a deal with Source Interlink, Trunk is now sold for $6.50 in 20 countries. Nancy Gonzalez, Lulu Frost and Bell & Ross are a few of the new advertisers in the fall magazine. Single page ads go for $3,000. The magazine has a circulation of 15,000 — 97 percent of whom are said to be passport holders — but there is an anticipated audience of 37,500 this issue. An iPad app is planned for the May 1 edition.

In step with its “The world is a fine place” tag line (words chalked up to Ernest Hemingway), the new issue spans the globe with James Whitlow Delano’s photo essay of life in the shadows of Indonesia’s 130-plus active volcanoes; François Spies’ tale of being mugged and later showered with goat urine in Ethiopia, and Nicholas Kulish’s piece about Alexandria’s scorched former glory. Photographer Anna Skladmann captured privileged Muscovite children in their gilded homes.

On a lighter note, there are two 16-page fashion spreads, one shot on and around Schaalsee lake east of Hamburg and a Jane Birkin and Serge Gainsbourg-inspired one done in downtown Manhattan, as well as four pages that plug Sydney-based stylist Sibella Court’s decorative hardware for Anthropologie. The chain along with Thompson Hotels, Swissair, Conran and Kartel are among the companies that offer the publication free to customers. About $16,000 was raised through Kickstarter to cover the cost of printing the fall 2011 run, but publisher and creative director David Cicconi does not plan to repeat that.

Like Venice-based design director Pamela Berry, Cicconi once worked at Travel + Leisure and later lived abroad. Another expatriate is editor in chief Diane Vadino, who called London and Paris home for a stretch after exiting Surface magazine. All three started Trunk and kicked in their share of capital.