Paper magazine cofounder Kim Hastreiter was one of the many sworn New Yorkers disoriented at the onset of COVID-19 lockdowns — suddenly marooned in a socially distanced bubble in a place where socialization had been a “constant” in daily life. This isolation, she found, was too much of a hindrance to even double down on creative tasks that once brought her joy.

But rather than face defeat, Hastreiter, who sold her stake in Paper more than three years ago and is no longer affiliated with the publication, decided to channel those emotions into a community project. On Jan. 31 she released “The New Now,” which she describes as a “public art project” and a “historical document of our time,” that comes in newspaper form.

The free broadsheet, which proudly states on its cover that it’s “free of advertising and “free of the internet,” is being handed out at New York City establishments including The Odeon, Café Altro Paradiso, Dover Street Market, Screaming Mimi’s and Dashwood Books, among other locales.

Its spreads are reminiscent of evenings spent outside one’s apartment, particularly at casual watering holes that drew a revolving door of zeitgeist-makers and creative minds. While these personalities no longer stew together in person, The New Now shows that they can assemble on the printed page.

While this camaraderie is currently reserved for its pages, Hastreiter sees it as a reminder of what will eventually be reborn in the flesh. “I did this for the sake of not making people feel so alone and cut off from everything and everyone,” she said. 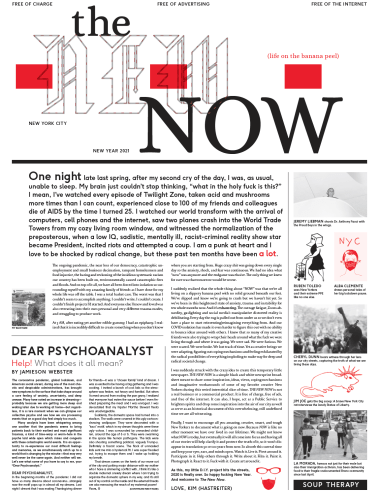 “The New Now is a simple black-and-white newsprint broadsheet meant to share some inspiration, ideas, views, coping mechanisms and imaginative workarounds of some of my favorite creative New Yorkers during this weird interstitial slice of time. The New Now is not a real business or a commercial product.…It can also, I hope, act as a public service to brighten spirits and drop some inspiration into the air of our city as well as serve as an historical document of this overwhelming, still undefined time we are all witnessing,” Hastreiter wrote in her editor’s letter.

The New Now’s assortment of stories recalls the randomness of errant conversation. LCD Soundsystem’s James Murphy writes about fishing, his newfound COVID-19 hobby; Hastreiter engages John Waters on the state of print and Michael Stipe about the concept of time; designer and sculptor Ted Muehling writes about his heightened appreciation for nature; former French Vogue editor in chief Joan Juliet Buck discloses an entry from her COVID diary, and designer Aurora James and model Bethann Hardison speak on matters of generational opinion and what it’s like to be Black women today.

There’s a full spread of soup recipes from chefs including Ingnacio Mattos, Daniela Soto Innes and Laila Gohar that sit beside illustrations by Ruben Toledo and Alba Clemente. Hastreiter said that it was important for The New Now to be a “multigenerational” project and, therefore, its contributors span ages 5 to 87.

None of their work will be available to read online — a stipulation that Hastreiter promised each contributor, who like many, are spending a disproportionate amount of time on their digital devices. She’s printed a first run of 6,000 copies and says that in an “ideal” world, The New Now will be a four-part series. While this first project is focused on New York, Hastreiter wants to widen its scope, with future imprints focusing on the U.S., then the world and the galaxy. She’s currently working on a video component with Dover Street Market in time for the New York Art Book Fair, scheduled in a virtual format for the end of this month.

But why would a former magazine editor who’s currently working on half a dozen books pseudo-reenter the media ring with a concept that brings no revenue? “I’m old enough that I see young people who didn’t live though the ’80s write about it and they don’t get it right,” said Hastreiter.

“I’m a believer in bearing witness and documenting what happened. I see stories getting morphed all the time now and I think it’s important for this era, whatever it will be called, to be documented. It’s not like 9-11, AIDS or anything I’ve experienced because those were events, but this is so abstract and has so many layers and keeps going. It’s history we are experiencing and this is to bear witness to that.”