Los Angeles — There’s an unavoidable sense of relief in the voice of Kim Hastreiter, half the irreverent pair, along with David Hershkovits, who founded Paper magazine on only $4,000 and a typewriter out of her loft near Manhattan’s... 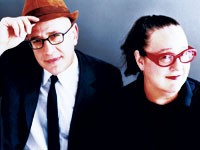 Los Angeles — There’s an unavoidable sense of relief in the voice of Kim Hastreiter, half the irreverent pair, along with David Hershkovits, who founded Paper magazine on only $4,000 and a typewriter out of her loft near Manhattan’s Canal Street. Relief because the downtown bible that started as a broadsheet poster and struggled on a prayer and cunning for its first decade is now a full-color magazine with global subscribers that has survived to see its 20th birthday.

The milestone is touted across the foldout cover of Paper’s September issue, featuring 10 of its more celebrated fans — Isaac Mizrahi, Eve, Bjork, Johnny Knoxville, Chloë Sevigny, John Waters, Jimmy Fallon, Joey Arias, Moby and Drea de Matteo. Inserted in the centerfold is a reproduction of the inaugural poster-size broadsheet, as well as the iconic 1984 snapshot of a gleeful Bill Cunningham fully extending the ’zine-like issue.

The birthday is also the impetus behind “20 Years of Style: The World According to Paper” (HarperDesign, $35), a visual encyclopedia chockablock with many of the magazine’s most memorable images, from fashion editorial to real-life documentation. It arrives on bookshelves Sept. 7.

The 250-page book couldn’t be as simple as a reprint of old layouts, however, said Hastreiter, chatting by phone from Paper’s TriBeCa headquarters, the magazine’s second formal home after gentrification chased them out of their Spring Street and Broadway offices. Keeping the magazine of their dreams alive was such a struggle that during those first years there, they often siphoned electricity from off-property outlets.

With this book, Paper’s second, she said they “wanted to talk about style and where it comes from. We’ve seen it start in all these different, underground places and become huge business.” To wit, the windows of Barneys New York kicked off the book and birthday on Wednesday.

“Kim and David have been running their own little Bauhaus for years,” said Simon Doonan, creative director at Barneys New York. “Paper’s consistent ability to nail trends before they happen is kind of staggering — bangee girls, vogueing, logo mania are just some of the things over the years.”

Some think, however, that Paper is no longer quite so ahead of the times. “Paper was very influential in the Eighties, when it had a voice that kind of screamed out to New York,” said Evan Schindler, editorial and creative director of Black Book. “But it didn’t really evolve much. I don’t think it’s as relevant now.”

The book offers that the three subcultures that “shook the world of style” over the last two decades are hip-hop, gay-drag and skateboarding. “Those subcultures crossed into every part of our culture,” insisted Hastreiter.

Crossover being the operative word. “So much of what we presented was this melding of art, fashion and music. It’s what life is about today.”

As for the relevance of such cultures today, Hastreiter huffed, “I hate when people say downtown is dead. There are still kids in some garage somewhere who are dreaming up ways to change the way we dress or what we listen to. It may not be below 14th street. It may be some kid in Alaska. But the kids are still doing it.”

Paper invited 100 fashion designers to create custom-made jackets for the new book. Carolina Herrera wrapped a copy in a crisp white shirt; Max Mara cut it a cashmere “coat”; Chrome Hearts crafted a black leather cover appliquéd with a big cross and signed on the back with its signature F*** You slogan; Martin Margiela provided simple muslin; Kate Spade delivered a classic Schwinn bicycle, accessorized with a custom-made basket holding the book; Todd Oldham’s comes with its own La-Z-Boy chair, and Judith Leiber recreated the original cover in black and white crystals.

With all proceeds benefiting DIFFA, an auction of the collection will begin at the Sept. 9 birthday blowout, co-hosted by MAC Cosmetics, at the Ukranian Institute of America on the Upper East Side. Whatever doesn’t meet the auction price will travel to Chicago for further bids. There, Paper is taking over a floor at Marshall Field’s from Sept. 18 to Oct. 8 and filling it with curated high- and low-brow fashion and furnishings. The opening includes a party and fashion show with Heatherette and As Four.

Then it’s off to Los Angeles Fashion Week at the end of October for another party, now in the planning stages.

If the parties weren’t proof enough, validation of Paper’s longevity comes further from its increasing ad pages, at 110 with this month’s issue, up 40 percent from a year ago this month. Two ongoing ad patrons since the first broadsheet are Manolo Blahnik and Screaming Mimis. Along with the more-expected streetwear and vodka brands are Dior, Lancôme Paris, Louis Vuitton, Geoffrey Beene, Target and David Yurman.

Paper’s indie ethos is reflected in its business model, which is strictly pay-as-you-go. Staying afloat without outside backing hasn’t always been easy, and there have been rumors that Paper has been for sale for some time. But Hastreiter said she and Hershkovits have never entertained offers for the magazine. “It was never our motive to start a magazine only to sell it,” she said.

With a monthly circulation of 88,000, Paper is smaller than some of its downtown rivals: Black Book and Interview both have circulations of about 200,000. Some 70 percent of Paper’s readers live in New York. Los Angeles and San Francisco dominate the remaining numbers, although there’s a sprinkling around the country and in Europe.

With age comes wisdom, and even Paper has recognized it can’t survive on being a trendy magazine alone. A full-service marketing division called Extra Extra launched in 2003, providing branding, custom publishing, focus groups and other insider know-how to corporate clients. Among them is the W Hotel Group, for which Extra Extra created custom concierge guides for 16 cities.

“Style is the impetus of everything we do and like,” added Hastreiter. “It just continues being fascinating to see the style that comes out of the cultural chaos.”