The ninth issue of the Brazilian jelly-shoe giant's in-house magazine Plastic Dreams trumpets its collaboration with the designer. 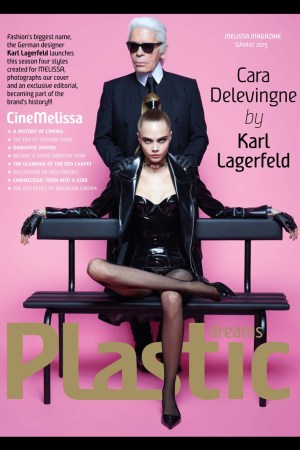 PAPER OR PLASTIC?: Melissa, the Brazilian jelly-shoe giant, is also a mammoth publisher. Its in-house magazine, Plastic Dreams, boasts a circulation of 300,000 in Brazil, plus 70,000 copies abroad.

Its ninth issue, which comes out today in Brazil, trumpets its collaboration with Karl Lagerfeld on the cover, and across almost 30 pages inside. The designer, who signed on for four seasons with the footwear firm, is pictured on the cover with model-of-the-moment Cara Delevingne, and he photographed a 16-page fashion feature inside, realized in his photo studio on the Rue de Lille in Paris. Delevingne wears styles from the first capsule collection by Lagerfeld, including one plopped on her head. One Mary Jane incorporates the colors of the Brazilian flag, while a black pump boasts heel decoration resembling an ice cream cone.

This story first appeared in the March 18, 2013 issue of WWD. Subscribe Today.

Another dozen pages in the issue focus on Lagerfeld, including an interview with the multitasking designer. American artist Robert McGinnis and photographic duo Inez van Lamsweerde and Vinoodh Matadin are also profiled in the 124-page magazine.

It is distributed to Melissa’s clients, at points of sale in 30 countries, along with digital versions compatible with Apple and Android devices.