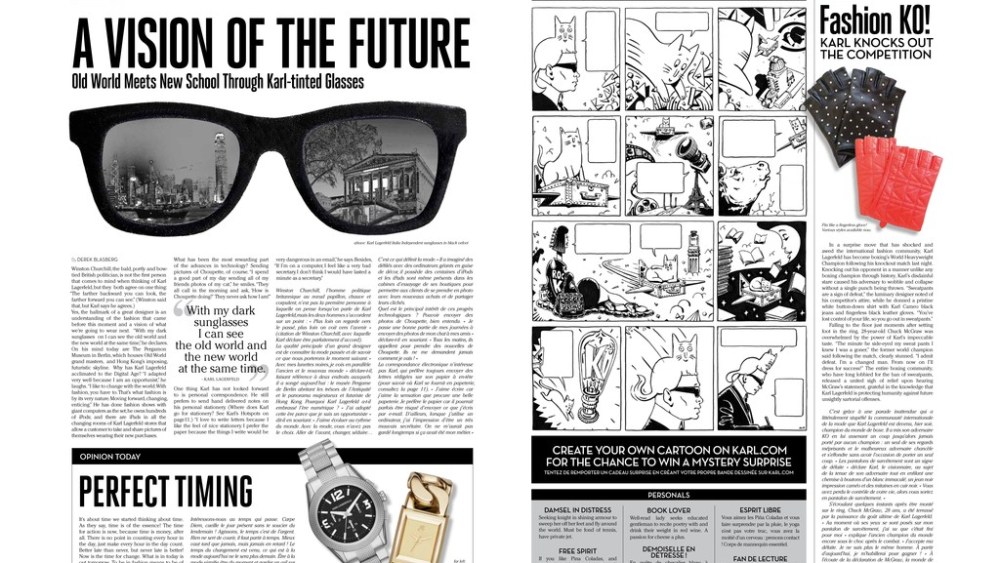 PAPER ROUTE: “Haute Off the Press,” screams the headline in The Karl Daily, a newspaper Karl Lagerfeld plans to distribute on Sept. 20 in the seven European cities where he operates freestanding stores for his signature brand. Distribution is to follow in the following weeks in China, with copies also landing in select stores, hotels and other cool spots.

Sprinkled amidst articles about the designer’s workaholic nature and far-flung collaborations are news tidbits about various Lagerfeld product lines — candles, watches, fragrances and leather goods. A comic strip, street-style photos and a list of hot spots round out the “satirical” broadsheet, which carries four pages of advertising for Lagerfeld brands. Tongue-in-cheek elements include fictional personals and Choupette, the couturier’s pet cat, serving as guest editor and reporter.

The newspaper dovetails with Lagerfeld’s fall campaign picturing model Kati Nescher posing in a mock newsstand stuffed with copies of The Karl Daily. It will also be backed with window displays, contests and digital components on social media and Karl.com.

Visitors to the Galeries Lafayette flagship in Paris on Tuesday night were treated to a teaser for the publication. A giant version of a sketch by Lagerfeld, featuring the designer reading a copy of the paper under the department store’s famed cupola, was unfurled to mark the opening of a Karl Lagerfeld corner on the third floor.