Dior Returns to Versailles for Next ‘Secret Garden’ Film

The latest one-minute episode from Inez van Lamsweerde and Vinoodh Matadin is slated to go live on Dior’s Web site on Friday. 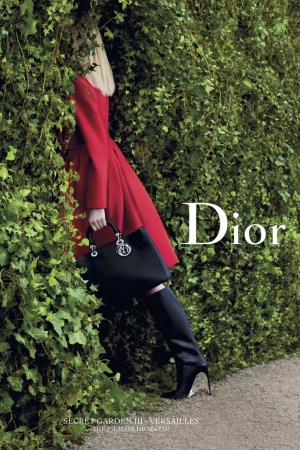 PARK PATROL: The Gardens of Versailles, which sprawl over almost 2,000 acres and are dotted with 50 fountains, shelter many hidden places — certainly enough for Dior to return for a third installment of its popular “Secret Garden” film series by Inez van Lamsweerde and Vinoodh Matadin. The latest one-minute episode, live on Dior’s YouTube channel, features a trio of models dashing through pathways and hedges as well as palace corridors to snippets of “Strange Love” by Depeche Mode.

Daria Strokous, Fei Fei Sun and Katlin Aas are the protagonists, wearing an array of fashions from lingerie to evening dresses, and toting signature leather goods. An accompanying print campaign is slated to break in June issues, starting with Harper’s Bazaar Hong Kong and French and Japanese Vogues.