The top 10 most-viewed parties and events of 2007 from Style.com. 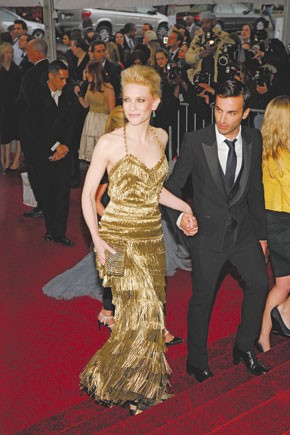 The fashion world always has its share of soirees, but 2007 seemed more manic than ever — barely a week went by without several parties, and some evenings had quadruplets. Style.com has provided the most-viewed events of the year on its Web site through Dec. 11 and, once again, the Metropolitan Museum of Art’s Annual Costume Institute gala drew the most views. While it’s hard to predict what will top next year’s list, two things seem certain: 2008 is likely to be even busier socially than this year, yet at the same time it might start with a whimper — with the writers’ strike still in full force, many film and TV awards shows could be pulled from the airwaves. Nevertheless, Graydon Carter, editor in chief of Vanity Fair vowed to press on with its party in 2008. “We’re going ahead as planned, although we have made provisions for a shorter-than-usual ceremony,” he said.

The Metropolitan Museum of Art’s steep red-carpet steps were filled with top names, including designers and even a few New York Rangers, for its annual Costume Institute gala, which this year celebrated Paul Poiret. The May event’s receiving line included Mayor Michael Bloomberg and co-chairs Anna Wintour, Nicolas Ghesquière and Cate Blanchett. And there were plenty of faces to greet: Eva Mendes arrived on the arm of Michael Kors, Christina Ricci came with Francisco Costa, Valentino walked Jennifer Garner through the exhibit and Donatella Versace brought Hilary Swank. In addition to celebrating Poiret, the event itself raised money for the Costume Institute — $5.8 million, up from $4.5 million the previous year.

The annual CFDA Awards were held this year in the Celeste Bartos Forum of the New York Public Library. And though the event started a wee bit late, CFDA president Diane von Furstenberg did her best to keep the evening running on time. Awards went to Proenza Schouler’s Jack McCollough and Lazaro Hernandez, who tied with Oscar de la Renta for Womenswear Designer of the Year; Derek Lam for Accessory Designer of the Year; Pierre Cardin; Edun’s Bono and his wife, Ali Hewson; Geoffrey Beene’s Robert Lee Morris; Patrick Demarchelier; Robin Givhan; Phillip Lim; Rag & Bone’s David Neville and Marcus Wainwright, and Loeffler Randall’s Jessie Randall. But Ralph Lauren no doubt particularly enjoyed the evening: He received the American Fashion Legend Award from Oprah Winfrey, along with Menswear Designer of the Year.

While viewers tune in to see the red-carpet action as much as the awards themselves, this year WWD said of the fashion, “Skintight, razor-sharp strapless sheaths in every color of the rainbow dominated the red carpet. But when everyone starts looking the same, it borders on becoming the dreaded s-word: Safe.” Fortunately, there were still plenty of standouts, like Cate Blanchett’s crystal Armani Privé Jennifer Lopez’s flowy Marchesa and Kate Winslet’s mint green Valentino. As for accessories, Gwyneth Paltrow showed a little glamour with her Fred Leighton diamond bracelets and rose-cut diamond chandelier earrings, while Anne Hathaway donned pearl and diamond pendant earrings, diamond bracelets with more than 100 carats and a 13-carat diamond ring — all from Van Cleef & Arpels.

The traditional January prelude to the Academy Awards had plenty of black and white gowns on the red carpet, but they were jazzed up with sparkly accessories. “Jennifer Lopez, Beyoncé Knowles and Sarah Paulson were just a few who gave subtlety the cold shoulder, instead jazzing up the carpet with Lorraine Schwartz’s sizable gems in an array of colored stones,” said WWD. Meanwhile, Hilary Swank opted for Chopard’s 53-carat diamond orchid brooch to decorate her hair, and Drew Barrymore went for a 50-carat Asscher-cut Leviev diamond ring. Angelina Jolie’s best accessory? Brad Pitt, of course.

The gala and shopping event, billed as the world’s biggest sample sale, began on Nov. 15 and was followed by a three-week sample sale at 7thonSale.eBay.com, which ended Dec. 6. The 69th Regiment Armory was decorated like a cross between Disney World and a medieval fair for the gala, which drew celebrities and designers such as Jennifer Connelly, Kate Bosworth, Kate Moss, Mary-Louise Parker, Valentino, Ralph Lauren, Giambattista Valli, Oscar de la Renta, Narciso Rodriguez, Amy Adams, Carolina Herrera, Eve and Mary-Kate and Ashley Olsen. “I bought two Fendi fur coats. I’ll have to change the buttons — they say Fendi,” said Diane von Furstenberg. The event has raised close to $13 million in the four times it has been held.

Partygoers came out in full force following the 79th annual Academy Awards, held in February. And there were plenty of options for those looking to unwind. Vanity Fair drew its usual crowd to its post-Oscar bash at Morton’s, including Madonna and Guy Ritchie, Naomi Watts, Nicole Kidman, Cameron Diaz, Gwyneth Paltrow, Gwen Stefani, Oprah Winfrey, Leonardo DiCaprio and Jennifer Lopez. Over at the Hollywood and Highland Center, the Governors Ball welcomed Oscar winners Helen Mirren, Forest Whitaker and Martin Scorsese. Meanwhile, at the Pacific Design Center, Sir Elton John held his annual party for his AIDS foundation, which this year was cosponsored by Chopard and raised $4.2 million. Zac Posen, Sharon Stone, Jon Bon Jovi, Victoria Beckham and Naomi Campbell were among those who attended.

“Given his reputation for flawless parties, Valentino had no doubt that his Rome bacchanal would become one of the most lavish events in recent memory ,” said WWD in July. The designer’s three-day 45th anniversary party, complete with fireworks, aerial acrobats and a surprise concert by Annie Lennox was said to have cost upward of $10 million. Throughout the weekend, crowds of locals gathered in front of barricades to catch the arrival of Hollywood stars, models, royals and jet-setters, which included everyone from Princess Caroline of Monaco to designers such as Giorgio Armani, Donatella Versace, Carolina Herrera, Christian Louboutin and Zac Posen.

For its annual Art Party this past summer, the Whitney Museum of American Art took its theme from the museum’s exhibit at the time, “Summer of Love: Art of the Psychedelic Era.” Sponsored by BCBG Max Azria and benefiting the Whitney’s Independent Study Program, “the fete brought out a brigade of revelers in florals, bright colors and headbands, who perused the Sotheby’s silent auction and lounged on the sleek sofas dotting the Skylight space,” said WWD. Sarah Michelle Gellar was decked out in a rosette-trimmed dress complete with Van Cleef & Arpels bling.

Co-chair Kate Bosworth turned up in Hervé Leger and spent some time beside a MaxAzria-clad Rosario Dawson.

source: Style.com; views were tallied as of Dec. 11