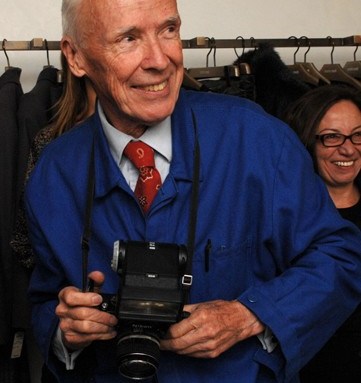 PARTY HOPPING: As if the media don’t have enough to do covering fashion week, the parties turn the race into an ultramarathon. Take Wednesday night: Bergdorf Goodman feted New York Times street fashion and party photographer Bill Cunningham, who couldn’t resist covering his own event. “Look at that — that is terrifying,” exclaimed Times chairman Arthur Sulzberger Jr., at the sight of jewelry designer Vanessa Sterbenz’s necklace made from decoupage of photos of Cunningham’s face. Another mini-Cunningham peered from atop the purple feather in her hair. Cunningham just beamed.

“He is truly a generally lovely man,” Sulzberger said. The event was cohosted by the Department of Transportation, in homage to Cunningham’s preferred ride — a bicycle.

Another co-host, Bergdorf chief executive officer Jim Gold, recalled being in a taxi in Midtown Manhattan and glimpsing Cunningham on his bike. “I must say, I felt a little lame,” Gold said.

An hour into the ceremonies, Esquire editor in chief David Granger introduced surprise guest speaker Bill Clinton from the balcony, who made note of Murdoch’s attendance when he rattled off two early observations: “I love Gotham Hall, but every time I’m here in the dark, I expect Batman to appear. The second is, I am a Democrat so it’s somewhat uncomfortable for me to be up here and Rupert Murdoch down there.” Clinton also used the gold medal-winning U.S. basketball team, of which James was a member, as an example of how working together can bring success.

EVEN THE STORES ARE COVERING FASHION WEEK: It seems everybody wants a piece of the fashion week game. As if the bloggers and online correspondents weren’t enough, now retail fashion directors are covering the shows for video diaries on the Web sites of Saks Fifth Avenue, Barneys New York and Nordstrom. Michael Fink, vice president and fashion director of Saks, reports from the hive of activity that is backstage, where he asks designers such as Carolina Hererra and Peter Som to describe their spring collections in three words. Fink predicts in one segment that styles “are going to be a little more pared down.”

Doonan said he and Gilhart have an unusual chemistry. “Julie and I are a funny juxtaposition because I’m sort of animated and try to be very telegenic and she’s just being Julie,” he said. “She spends a lot of time trying not to laugh and maintain the seriousness of this.” Barneys is producing seven videos, including “Leather: You’re Not a Hired Assassin,” where viewers will learn not to wear leather from head to toe.

Nordstrom’s executive vice president for designer fashion, Jeffrey Kalinsky, appears in “Town Car Chronicles.” After opening graphics of line drawings of the Manhattan skyline, the camera cuts to Kalinsky in the back seat of a Town Car. Describing Marc Jacobs’ collection, he says: “It was a tour de force. There was so much mixing and matching and mismatching. It just worked perfectly together. The feeling I had tonight when I left that show, that’s why I’m in fashion and that’s why I love fashion shows.”

TOKYO A-GO-GO: Louis Vuitton is giving Japan plenty of special treatment these days. Not only is the French luxury giant selling special leather goods designed by Rei Kawakubo of Comme des Garçons exclusively at a special temporary store in Aoyama, but it also has launched a striking Japan-only ad campaign. It’s out in October fashion titles and on billboards, including one outside the Vuitton flagship on Omotesando. The star is French actress and beauty icon Laetitia Casta, embracing an iconic bag in Damier check in one image. “It’s very romantic and super French,” said Antoine Arnault, Vuitton’s director of communication, characterizing the spots, with an accent on leather goods, as a way to fuel its momentum in a sluggish market.

REMEMBERING YVES: Carolina Herrera, Tom Ford, Allure editor in chief Linda Wells, Pierre Bergé and Catherine Deneuve are paying tribute to the late Yves Saint Laurent in a documentary that will air on Sept. 18 on NYCTV (channel 25 on Time Warner Cable). The documentary, from Videofashion Network, is the beginning of a 52-week “designer marathon” series that will cover 52 different designers such as Donatella Versace, Stella McCartney and Vivienne Westwood. “He’s the most important designer of our time, is he not?” Bergé said in the program. “He did so many important things, such as the tuxedo, see-through dress, pants for a woman, and so many, many things. Also, very important for me is the wonderful sense of color.”

Saint Laurent also is featured in the documentary. “I would like to be remembered with respect,” said the legendary designer, who died in June. “I have learned from Christian Dior that fashion was not at all a futile profession where one amuses oneself, but a very profound and respectable thing.”

MICHAEL’S NEW FRIEND: Before Michael Kors’ show Wednesday, the designer greeted Blake Lively in the W Hotels VIP lounge and chatted about how close the two of them have become since meeting on the set of “Gossip Girl” (Kors will appear in an upcoming episode). “We should just tell people we are dating now! We have become so close. Let’s go shopping together this weekend,” he said. Bette Midler then entered the room and Kors said, “There you are sweetie — come do photos with us. Oh, and you should come shopping with us, too.”

POWER IN PICTURES: Richard Avedon may have been known primarily for his fashion photography and portraiture, but he had a lifelong fascination with power, too. That power, and its interplay with politics and culture, are the central themes tying together a new exhibit of Avedon’s work, opening Saturday at the Corcoran Gallery of Art in Washington. The exhibit features portraits of political, legal, cultural and media elite ranging from the Kennedys to Donald Rumsfeld and Joan Baez. The Avedon works in the exhibit tell a story about the American political process, said Paul Greenhalgh, director and president of the Corcoran Gallery of Art, which is particularly timely in the current election cycle.

“Power in governments, in business, in religion, in law, in media and culture was, Avedon once said, among his greatest subjects,” said Paul Roth, senior curator of photography and media arts for the museum.

The works shown span Avedon’s entire career, starting in the Fifties and ending with an incomplete series called “Democracy” that the artist was shooting for the New Yorker in 2004 when he died of a brain hemorrhage. Among the most recent photos is a picture of Democratic presidential nominee Sen. Barack Obama taken when he was primarily known as the keynote speaker from the 2004 Democratic convention in Boston.

The exhibit will be in Washington through Jan. 25, after which it will travel to other cities that have not been determined.

READING MATERIAL ON THE LAKEFRONT: Niche Media will expand its coverage of urban socials to Chicago with Monday’s launch of Michigan Avenue. The magazine, edited by Chicago Sun-Times columnist Susanna Homan, will make its debut with 360 pages, of which 160 are ads from brands including Armani Exchange, Aston Martin, Bebe, Bloomingdale’s, David Yurman, Dennis Basso, Louis Vuitton and Saks Fifth Avenue. The magazine will publish a holiday issue this year and move to a 10-times annual publishing schedule next year. Niche Media chief Jason Binn said Chicago was primed for entry given the few number of city magazines catering to the area’s well-to-do. Dekalb, Ill., native Cindy Crawford appears on the inaugural cover, and inside discusses her new furniture line, her family and dispels rumors she was discovered detassling corn on her farm. “I used to work in the cornfields like every kid in Dekalb did,” she said, but a local photographer told her to think about modeling after he shot Crawford for her college newspaper. According to the company, Michigan Avenue has already brought in more than $3 million in revenue.