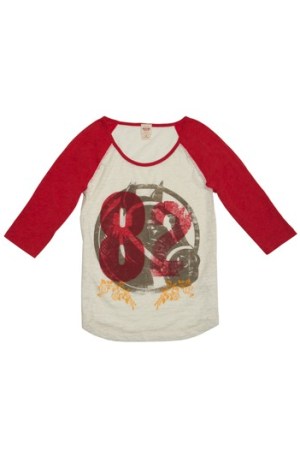 PAST FORWARD: Target is making everything old new again. The retailer’s new ad campaign, themed “Cool Never Fades,” features four U.S. locations it deems “timeless.” The places are highlighted in videos on Target’s Facebook Style page. The ad campaign was inspired by Target’s Vintage Varsity collection, which features graphics from the Hamilton Wood Type & Printing Museum in Two Rivers, Wis. A video about the design process at Hamilton can be seen on YouTube.

Launching Sunday in all Target stores and July 17 on target.com, Vintage Varsity’s 90 items include T-shirts, hoodies, leggings, sweatshirts, sweat pants and tote bags for women, men, juniors and children, priced from $9.99 to $24.99.

“Target’s trend team has been watching the reemergence of all things authentic and retro,” said spokesman Joshua Thomas, adding that more than 100 hand-pressed prints were created for the collection.

Other locations featured in the new ad campaign include the circa-1878 Gruene’s Dance Hall in New Braunfels, Tex., and the Fry Recording Studio in a former Nashville pharmacy that opened in 1920.

TAMING TATLER: Happiness, as the aphorism goes, writes white, but Tatler’s editor Kate Reardon couldn’t give a damn. Since taking over the job in January, she’s been determined to produce a humorous, and well-mannered society magazine in a country where the mainstream media loves nothing more than ripping the rich and privileged to silken shreds. Unlike past iterations of Tatler, which is more than three centuries old, there’s not a trace of snarkiness or snobbery.

“We’re thinking very carefully about the sort of people that we feature. It would be very easy to do endless ‘Look at these ghastly people’ exposés, or let them hang themselves with their own words,” said Reardon from her near-paperless corner office, so empty it looks as if she’s hot desking. “I don’t want to make enemies, and I have no interest in being mean. I want to fill the pages with people that we genuinely think are laudable and interesting.”

Reardon said she wants her Tatler to be “a kind of posh theme park where everybody’s got beautiful manners, and quite a lot of them are in gowns, and everyone has got great skin, and is really enthusiastic, and writes thank you letters. It might not really exist, but then again I think the world of American Vogue doesn’t really exist. I mean, it is a lovely, soothing, entertaining fantasy.”

It helps that Reardon — a statuesque blonde with great skin — is a denizen of that particular fantasy land. She’s been riding horses since she was a child, and is a devoted fox hunter. Later this month, she’ll be taking part in a charity horse race at Goodwood in Sussex, England, wearing Hermès silks. And she’s no stranger to Tatler: She was made fashion editor of the title when she was 21, and eventually left to pursue a freelance writing career where she served as a contributing editor at Vanity Fair, and produced special supplements for Tatler.

“I am a great, thumping Sloane and these are my people. The delight in editing Tatler is that I can write about things and cover areas that are naturally of interest to me,” she said. “We have just come out with a hunting, shooting and fishing supplement which no other glossy magazine on the planet would touch.”

Recent features in the magazine include “The Top 10 Posh Ghosts,” “How Celebrities Look Better Than the Rest of Us,” the smartest smoking rooms, up-and-coming young fund-raisers, and how the septuagenarian talent agent Duncan Heath waltzed his way to wellbeing.

It’s still early to gauge just how successful Reardon’s fresh take on Tatler has been: The first full Audit Bureau of Circulations period that will fully reflect her job as editor won’t be reported until February. According to a Condé Nast spokeswoman in London, however, ad pages are up year-on-year in the main book. Reardon has also introduced two new supplements, one for parties and “Hunting Shooting, and Fishing,” both of which are sponsored.

Over the next few months, Reardon will be ramping up the anemic Tatler Web site with party coverage — she plans to have photos of events posted the following morning — and lots of augmented reality so that readers can virtually try on millions of dollars worth of jewelry and accessories.

Back in the print universe, Reardon has picked the younger Miss Middleton as her cover girl, with a cover line that reads, “Pippa: The Bottom Line.” (The photo she uses is an embellished one from the wedding). “I think Pippa has a much more complicated situation than Kate because she has no protection in terms of security, in terms of advice on how to deal with the media, or protection from the media,” Reardon said. “And yet [she and Kate] always look cheerful and grateful and enthusiastic. They don’t look like sulky girls. That is what I say to the advertisers about Tatler, that is my dream. Tatler is going to be the most fun girl at the party, not the rich girl you want to slap.”