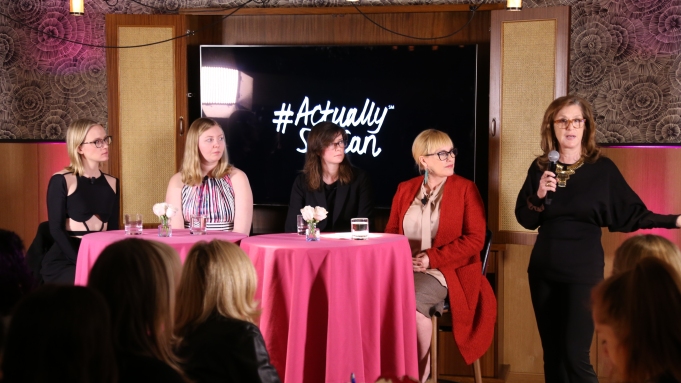 On Wednesday morning in the lower level of the Smyth Hotel’s Little Park restaurant, four women sat together to talk about inclusion. Producer Anne Munger, directors Emily Harrold and Erin Sanger and actor Patricia Arquette comprised the panel of power-broads who’d been assembled as part of the #ActuallySheCan campaign, which aims to empower women and encourage them to be their best selves by supporting other women. Seems like a modest proposal on a hot-button topic? Perhaps. But Arquette stressed that changing the culture surrounding the film industry’s inclination to keep women out of certain roles starts with conversation.

“Only 7 percent of directors are female, even though we are 51 percent of the population,” she said. “I don’t think we’ve seen stories like the ones [Munger, Harrold and Sanger] are telling in their films through the female gaze. People’s experiences and stories need to be told.”

Harrold, who directed a film on Cosme chef de cuisine Daniela Soto-Innes, acknowledged that while growing up her parents gave her unwavering support to follow her dreams, but once she entered the working world, reality set in.

“As you step into the industry, you do start to notice things, like, oh, is he just saying that to me because I’m young, female and blonde? It’s not always overt, of course,” she said. “I’ve become more aware of how I’m perceived as a woman documentary filmmaker as time has gone on.”

Becca McCharen, the designer of Chromat and the subject of the film Munger worked on, was on hand at the event to talk about her experience being trailed by a camera crew while she prepared her swim, lingerie and sportswear line for New York Fashion Week. Her collection, which she worked on in part with Intel, taps inclusivity in the broadest sense of the word. Tech elements such as bionics and heat-sensitive sports bras are worn by plus-size and transgender models. And Lauren Wassner, a runway veteran who lost her leg after suffering from toxic shock syndrome, walked in the fall Chromat show with a prosthetic.

For McCharen, the future of fashion uses 3-D printing and body scanning for optimal personalization. It’s most important, she said, to cater to each individual’s shape.

“As we’ve gone down the road with women’s lingerie, we’ve realized no bodies are the same. It’s so hard to just dictate sizes and how that fits for different people. In the future, I see everyone having a copy of their own body scan, and you’ll be able to download your clothes online and print it out in the color of your choice,” McCharen added. “I really love the idea of well-fitting clothing that’s custom-made for you being accessible to everyone.”

Meanwhile, Arquette briefly touched on her famous Oscar speech, in which she called for equal pay for men and women after she won for best supporting actress in 2015. “I said to my boyfriend, ‘I’m gonna say something if I do win,’” she recalled. “‘I’m gonna lose some jobs over this. But I’m cool with it.’” Her conviction didn’t waver, either, when she was asked what she’d say to critics who claim it isn’t a woman’s “time” to be fully represented and included in the film industry. “That’s such a convenient argument,” she stated. “People need opportunities. You can’t just say their time hasn’t come. You can’t talk caveman to me.”