The organization is looking to ramp up high fashion in its women's apparel ad campaign. 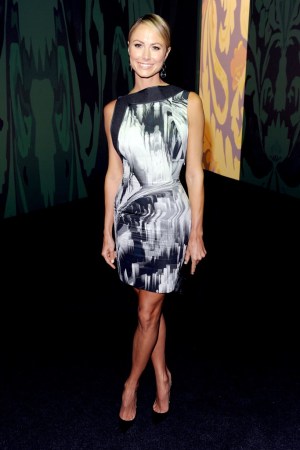 DESIGNERS WIN THE TOSS: The NFL recruited Patrick Demarchelier to shoot Stacy Keibler Wednesday at Milk Studios in New York to ramp up high fashion in its women’s apparel ad campaign. The actress can hold her own in any football stadium — long before she met George Clooney, Keibler was a Baltimore Ravens cheerleader. The now red-carpet regular went with a Ravens shirt and Christian Dior pants for the new NFL ads, which will break in August.

New York Jets owner Woody Johnson’s wife Suzanne, who is the league’s brand ambassador for women’s apparel, was also on set in the Meatpacking District. She opted for Chanel and Van Cleef & Arpels to dress up a body-hugging tank from the home team.

Not playing any favorites, she also reeled in Tanya Snyder, whose husband, Dan, owns the Washington Redskins, and Tavia Hunt, whose better half, Clark, owns the Kansas City Chiefs. Dallas Cowboys executive Charlotte Jones Anderson also made the cut, as did seasoned pros Karolina Kurkova, Hilary Rhoda and DJ Kiss.