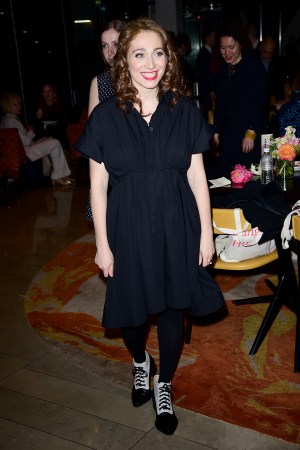 Dancer and choreographer Bill T. Jones had to raise his hand like a stop sign four times to hold off applause as he sang his way through Countee Cullen’s “Yet Do I Marvel” and other works. And the crowd’s rousing response to Regina Spektor’s musicality even waylaid her. “I didn’t write them,” she demurred. In closing the Academy of American Poets-sponsored event with an impromptu performance of “American Tune,” Paul Simon began with, “I call this feeling groovy.”

Unlike the master of ceremonies Elizabeth Alexander, a professional poet, the talent that took to the stage hailed from other disciplines. “Mad Men” creator Matthew Weiner, actress Amy Ryan, artist Lesley Dill, “Brain Pickings” founder Maria Popova, composer Mohammed Fairouz and Ruth Reichl each did their part. Fairouz translated from Arabic a one-stanza poem by Mahmoud Darkish, named it “Lullaby” and tapped Carla Dirlikov to sing it completely unamplified. Weiner said before reading “The Moose” by Elizabeth Bishop, “It’s a little bit long. You should be prepared for that.”

Such caution seemed unwarranted given the silence in the auditorium. Afterward, Spektor allowed, “I think people who love poetry just have an optimism and a desire to see the beauty in the world. They are already more inclined to be supportive people. I don’t think you’re going to find a lot of a——s who love poetry.”

She added, “I grew up in the Bronx and it would make me so happy to see those poems on the subway. You read a poem and it opens you up. It kind of tunes you to a channel and then you’re more likely to notice poetic things about other things that happen to you throughout the day.”

Writing and recording new songs, Spektor still finds her own poetry above ground in the city. “A lot of the time I’m writing, walking the streets. I find New York endlessly inspiring with the amount of stories unfolding around you. You’re basically always in a tempest. If you get into the right state of mind, you’re in the center of the tempest. It’s peaceful and your feet are walking so there’s a rhythm. You just naturally hear melodies and see images that make you think of words. I don’t know who writes without walking.”

At work on projects for the Dutch National Opera, the Pittsburgh Opera, the Washington National Opera and a symphony for the Abu Dhabi Music Festival, Fairouz sees music as a borderless form of poetry. “All cultures have music and it’s unifying. It serves a certain utilitarian purpose – to march off to war, to serenade one’s loved ones, to mourn the dead. But what is much more organic or elemental is that the human voice is a muscle,” he said. “We never ever hear about people talking about if swimming is unique to a certain culture, or is soccer unique to a certain culture.”

Fairouz continued, “The ultimate answer to any culture whether it’s in the Arab world or rural America that says our culture is at risk, is ‘No, you actually can be part of the whole and not lose any of your individual reason for being.’ If you separate a line in Bach, you can listen to it and it’s gorgeous.The thing that makes counterpoint unbelievable is that when you combine it, you prefer to listen to it combined because it’s better. That’s where the world is headed whether people like it or not.”