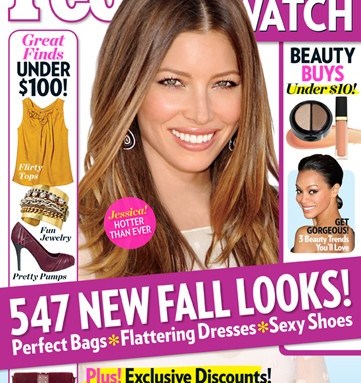 UPPING THE ANTE: Following a 15 percent spike at the newsstand during the first half of this year, People Stylewatch is getting ready to raise its rate base by 50,000 copies, to 775,000, and add an extra issue for 2011. The magazine’s June-July issue, with Lauren Conrad on the cover, proved to be the first-half bestseller (with 621,000 copies sold at the newsstand), so it’s not exactly a stretch that next year, publisher Karin Tracy has decided to publish June and July separately. Tracy added the title will publish four perfect-bound issues next year, up from three this year. Looking ahead, Tracy noted that the October issue, with Jennifer Aniston on the cover, is up 9 percent in ad pages.

SPECIAL VIEW: Vogue Italia has added another dimension in its September issue, with a cover and 22-page feature with Miranda Kerr shot by Steven Meisel and a beauty story completely in 3-D. The latter piece, called “The Scent of the Future,” is also the name of a multisensory exhibition organized by editor in chief Franca Sozzani and Procter & Gamble Prestige that will take place in Milan during fashion week this month at Palazzo Citterio. “I believe this photo shoot, so visually and technically innovative, is the demonstration that there are still ways to make printed paper more and more interesting,” said Sozzani. Numbers seem to back up Sozzani’s comment, given that Vogue Italia has seen a 15 percent increase in the number of readers since last year, to 776,000.

AGENT PROVOCATEUR’S HOME MOVIES: Agent Provocateur is putting its lingerie under the female gaze for fall. On Thursday, the London-based lingerie label launched its latest viral campaign, featuring model Kirsty Hume and shot by commercial and music-video director Johan Renck, on YouTube. The two-minute film features Hume slowly disrobing in a low-rent bedroom studio set. However, it soon emerges that rather than starring in the movie, Hume is directing a hapless male model — dressed in white Y-fronts and bunny ears — in the erotic film. Sarah Shotton, creative director at Agent Provocateur, said Hume represents the label’s “perfect woman.” “She has a film noir, feline quality to her that I felt had brilliant synergy with the collection and what we are about at Agent Provocateur,” said Shotton. She was named creative director of the firm earlier this year, after co-founder and creative director Joe Corre left the business. Now, the firm is owned by the private equity group 3i.

Alongside the short film, Renck has shot a fall 2010 print campaign for Agent Provocateur. The label has also produced a video look book for its Web site, which features anonymous women making home movies of themselves wearing the label’s fall lingerie looks. And while the London Sunday Times Style magazine ran a behind-the-scenes video of the campaign shoot on Sunday, unlike most fashion campaign news it didn’t instantly do the rounds of bloggers and other news outlets, thanks to it being hidden behind Rupert Murdoch’s newly imposed pay wall.

SELF-ACTUALIZING: With ad dollars now trickling back to print, the hunt is heating up in sales departments across the industry. Newly minted Self publisher Laura McEwen will have a fresh arrow in her quiver this month with a trade branding campaign titled “iCurate.” “It’s about a woman in charge,” McEwen said of the ads, which tout the magazine’s print, digital and mobile platforms with slogans such as “fit is the new fashion,” and “health is the new happiness.” The spots will run in trade press and atop New York City taxis. “It’s a trade [campaign] that could have applications for the consumer,” McEwen added.

The publisher, who moved to the health and fitness title from Teen Vogue in June, may need the exposure. According to the most recent figures from Media Industry Newsletter, Self’s ad pages are down 3.6 percent for the year, even including a 15.6 percent gain in September. McEwen said that while she’s working to increase the business Self sees from its core well-being categories, she’s also looking to expand its horizons. “I think bringing more fashion, more retail, more beauty is definitely a goal,” she said. Under her watch, the magazine has landed spots from Givenchy and Dior’s respective fragrance divisions for the December issue. The Self buy is a first for Givenchy and a first in more than two years for Dior. “I feel there’s an energy that’s helping the second half of the year,” McEwen said confidently. “I think we’re rebounding.”

SAM EDELMAN PUMPS UP ADVERTISING: In the new Sam Edelman ad campaign, model Charlotte Kemp Muhl does things with shoes that foot fetishists can only dream about. Actually, there’s nothing unseemly about the photos; what’s erotic is the unabashed pleasure she gets from admiring the shoes while wearing just barely enough to cover her assets. Choosing Kemp Muhl for the campaign was critical, said Sam Edelman. “When the second girl [Charlotte] walked into the audition, Sam [Shahid, creative director] and I grabbed each other’s arms and said, ‘It’s her,’” recalled Edelman. “I asked her, ‘Why’s your hair wet,’ and she said, ‘I was just skinny dipping with my boyfriend’s mother.’” Kemp Muhl, who dates Sean Lennon, was referring to Yoko Ono. The ads, which appear in Vogue, Harper’s Bazaar, InStyle and Vanity Fair in the fall, mark an aggressive new advertising strategy for Sam Edelman under the Brown Shoe Co., which became its 100 percent owner in June. “Our advertising budget has gone from several hundred thousand dollars to millions of dollars,” Edelman said. Kelly Klein shot the images in hotelier Sean MacPherson’s loft in the Meatpacking District. Sam Edelman’s growth initiatives include opening the company’s first store in SoHo in fall 2011, followed by three more units, launching billboards in New York and Los Angeles and aggressively pursuing licensing the name for jeans.