The men’s wear label’s Very Perry campaign has chosen instead to use black-and-white portraiture with pops of color. 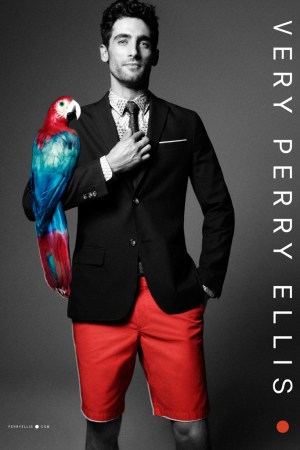 ALL ASHORE: Perry Ellis ditched the beach for its spring ad campaign. Long known for imagery that includes sun, surf and sand, the men’s wear label’s Very Perry campaign has chosen instead to use black-and-white portraiture with pops of color. The ads, which were created by Yard, are designed to evoke wit and levity, the company said. Three male models, Gabriel Chytry, Rainer Andreesen and Vladimir Ivanov, as well as female model, Lindsay Lullman, are featured in the ads. Interestingly, actor Victor Garber came out earlier this week and introduced Andreesen as his boyfriend, giving the campaign a boost before it has even gone public.

“Perry, and the brand he created, had such an optimistic approach to life,” said Matt Cronin, vice president of marketing for Perry Ellis. “He felt fashion should be fun, witty and inspiring. Though the clothes change season to season, Perry Ellis’ essence is very much something we want to honor and portray to our consumer.”

The campaign will launch in March fashion magazines including GQ, Esquire, Men’s Health, and OUT. Key markets such as New York, Los Angeles, Dallas and Toronto will also have outdoor marketing.