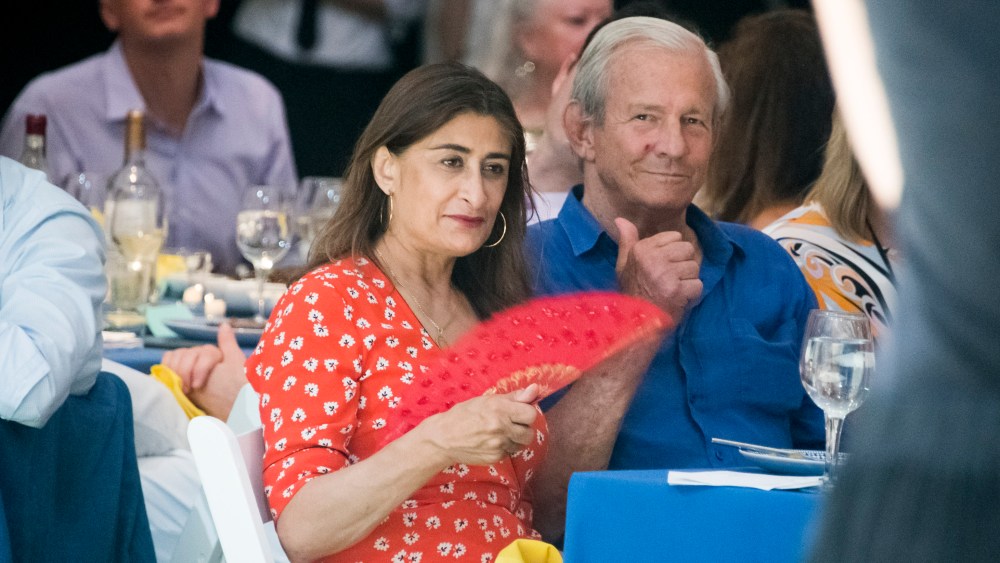 Confirmation of Peter Beard’s death Sunday night served as the last word of an adventuresome and rollicking life.

The peripatetic photographer, naturalist, author, environmentalist and sometimes society man had been reported missing from his Montauk, N.Y., home on March 31. The 82-year-old had suffered from dementia. A spokeswoman for his family issued a statement confirming his death and acknowledging his robust life.

Earlier Sunday, detectives in the East Hampton Police Department released information that clothing and human remains of an elderly man had been recovered from a search of Camp Hero Park in Montauk. That was initiated after a hunter notified local law enforcement authorities that he had found clothing in a densely wooded area near the Old Montauk Highway that matched a description of what Beard was wearing when he went missing.

Beard is survived by his wife Nejma Khanum Beard and daughter Zara Beard, as well his brother Anson. His family has not yet decided on plans for a tribute or a memorial.

Beard devoted much of his career to chronicling Africa with his photographs, journals and books. At the midway point in his life, Beard told WWD that he still considered himself an amateur. That was despite the fact that one critic acknowledged how Beard “could wield a camera with the intuitive skill of a great war correspondent.”

Beard’s artistic leanings and fascination with nature had come into sharp focus as a boy. His grandmother, with whom he summered in Tuxedo Park, N.Y., gave him his first camera.

The middle son of a New York City stockbroker, Beard was 17 years old when he first traveled to Africa with Quentin Keynes to work on a film about such rare wildlife as the white and black rhinos of Zululand. His undergrad days at Yale University started as a pre-med student, but he later switched tracks to focus on art. Beard learned from greats like Vincent Sully, Joseph Albers and Richard Lindner.

While at Yale, that innate pull for more explorations drew him back to Africa. Rather than polish up his senior thesis on the Ivy League school’s New Haven, Conn., campus, Beard mailed in his diaries from Kenya. The artist’s penchant for journals carried on for decades and consisted of images, drawings, text and sometimes writings in his own blood. Beard’s 1977 breakout one-man show at the International Center of Photography in New York City was the start of many exhibitions to follow. His agility could be seen in such diverse images as someone cutting meat to his ex-wife in her wedding dress jumping into the ocean. When Beard was honored by the Gordon Parks Foundation in 2013, a genuinely bemused-looking Beard told the crowd, “I’m being honored for what I like to do. But I’ll go along with it.”

Stephen Frailey, chair emeritus of the School of Visual Arts and author of “Looking At Photography” author said Monday, “Peter Beard’s vitality and colossal vigor was imbedded into his collages. The enduring photographic influence and resonance will be his use of the photograph as a diaristic manifesto, a thronged palimpsest of writing, collages photographs, ethnographic notation, often bound by blood as if a ritual wound. And the notebooks further crammed with vivid experience – phone numbers, tirade, newspaper clippings, local glamor and the female body – all clamorous and irresistible.”

Tan, angular and handsome, the photographer never outgrew his good looks or wanderlust. Throughout his life, the inveterate lensman moved in many circles easily crossing from one social caste to another. But his affinity for Africa was a constant and his inspiration, Karen Blixen, the author, who used the androgynous pseudonym Isak Dinesen to publish “Out of Africa” was always near. Beard was known to prop up a photo of Blixen wherever he happened to be living at any given time.

When back in the U.S., Beard ran with the beautiful people. That high-wattage glamour was magnified partially due to oft-photographed nights out in New York City with Jackie Onassis, Andy Warhol, Truman Capote, Barbara Allen, Bianca Jagger, Delfina Rattazzi and other notables. The quick-witted sharpshooter seemed to see through the veneer, as evidenced by his description of a Halloween party at Studio 54 in the late Seventies — “pretty good anthropology.”

Beard could have chosen the life of a real insider, but he preferred to be an outsider, as in one who reveled in the wildness. By his own admission, his first marriage to socialite Mary Olivia Cushing Beard dissolved because “she couldn’t get into the African thing.” His second marriage to the model Cheryl Tiegs also ended in divorce.

Tiegs said Monday, “Peter Beard was the most romantic love of my life. Living in Africa elevated my life experience, and therefore my soul. His ideas and insights were endless.”

Beard downplayed the role of a bon vivant in a 1978 interview, telling WWD, “I am not a dinner party man. Never was. Just can’t get it together, you know. Don’t even have a necktie or a suit.”

To further illustrate that point, he said of dating Lee Radziwill: “That just meant that she had to go on a lot of picnics. Cause I wasn’t going to go to those dinner parties.”

Wherever he turned up, Beard could be counted on for straight talk, telling WWD in 1978: “I would like to say that I am one of those great missionaries and martyrs that everybody loves. I think people are interested in my book because they think I am one of those do-gooders. But my concerns are very selfish and rather unattractive, really. I’m just trying to scrape through.”

At that time, Beard said he didn’t even consider himself a photographer. “Most photographers are idiots. That’s the horrendous truth. It’s a parasite field. Because all you have to do is squeeze your index finger, and you’ve got yourself a profession.”

The portfolio told a different story — books, arts, photos, written and visual materials. The model Iman has been described as a Beard-made beauty. And the photographer wasn’t afraid to address the commercial side of his work at a 1976 party in his honor hosted by a Lauren Hutton. While the likes of Rudolf Nureyev and Mica Ertegun celebrated his drawings of Africa and his book “Longing for Darkness,” the filmmaker John Hemingway described Beard’s vision of Africa “as the tortured part of all of us..it’s beauty born out of the ashes.” But Beard offered, “Don’t forget that everything is for sale,” as he feasted on fresh oysters.

Beard cared deeply about his time in Africa, where he owned the 49-acre Hog Ranch. In the mid-Nineties after being nearly gored by an elephant — which Beard referred to as “the elefante” — the photographer required seven plates and 28 pins in his hip to regain his mobility. But he carried on during his recovery, turning up at a retrospective of his work at the Centre National de la Photographie in Paris. And at the age of 68, he was unabashed at a 1996 Junko Yoshioka fashion show about having just pulled an all-nighter with The Rolling Stones that had ended at 11:30 a.m.

Photographer Chris Makos said Monday Beard was a great naturalist and ecologist “way before the Save the Animals kind of thing emerged, or Earth Day. He created a niche of his own.” Beard crusaded to protect elephants similarly to how primatologist Jane Goodall works on behalf of the chimpanzees, Makos added.

Makos also spoke of how Beard’s work turned after a 1977 fire destroyed his Montauk home. “It’s not that he lost interest. To lose all of your negatives and all of your stuff, that is sort of altering your id. Photographers are their photos. He was an analogue photographer. Once you lose all of that material, [you ask], ‘Well, who am I? Am I just my memories? What am I?’ It’s whatever work existed. He had some work left, but that was pretty traumatic. It did not take away his career, but it took away parts of the history of his career.”

His own creativity stemmed from years of knowledge. Working in Tsavo National Park led to his first book, “The End of the Game,” in 1965, which examined the imbalance between the people, the land and the animals. Twelve years later he published a second iteration of that title, documenting the massive die-off in Tsavo of 35,000 elephants and 5,000 rhinos. He addressed the struggles and imbalances of Africa in other ways. Most of his adult years were spent between Kenya, Montauk and New York City. After finding a game poacher on his expansive property once, Beard tied the man up in his own animal snare wires, stuffed a glove in his mouth and left him there. That deed cost Beard a week in an African jail.

Beard discussed the seismic die-off in Tsavo In an interview with WWD in 1978: “Do you know every single mature elephant in a sample of 2,000 from this completely claustrophobic population had advanced cardiovascular disease from stress? It’s from crowding, density, destruction of habitat, competition for survival in a finite area that everybody always thought was too big to be destroyed. And that’s exactly what we’re living in.”

From Beard’s perspective, the problem was rooted in a “zoo mentality — the poodle lovers and Pekingese keepers of the world,” who fought elephant game control. More than 50 years after Beard’s book was first released — the issue remains one that is being talked about today as evidenced by Disney’s “Elephant” documentary that has the voiceover and support of Meghan Markle.

Traces of Beard’s work can also be found in such books as his “Zara’s Tales: Perilous Escapades In Equatorial Africa” and the Taschen monograph “Peter Beard.”