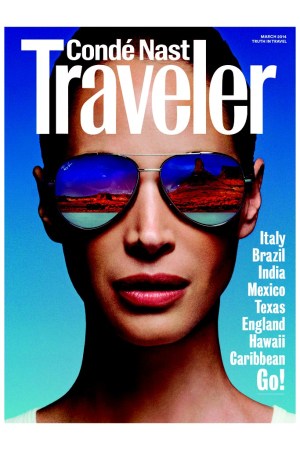 PILAR’S NEW TRAVELER: Pilar Guzmán has been in the top job at Condé Nast Traveler for just over six months and in that time, the former editor of Martha Stewart Living and the defunct Cookie magazine has been in the process of revamping the travel title. She considers the March issue the first real example of her work — and there are a few surprises, beginning with the cover. There is a “human,” as Guzmán described it, rather than the typically exotic destination. And not just any human, but a super-closeup of supermodel Christy Turlington Burns, wearing Ray-Ban aviators that reflect an Arizona-inspired terrain.

“It all started to look the same across the category, and it’s not just us,” the editor in chief said of travel magazine covers. “I asked myself, ‘How do you get people to do a double-take?’”

The cover, which contains a vertical list of eight destinations — the predictable mix of England, Hawaii and Mexico — in chunky white lettering followed by “GO!,” has a retro feel.

While Guzmán has been “playing with scale” on the covers, she also has extended that idea to the inside of the book. Focusing on photos and an easy-to-read, Pinterest/ Tumblr-inspired layout, the magazine also has a more fashionable feeling with a new stable of photographers more frequently found in the pages of Vogue — Inez van Lamsweerde and Vinoodh Matadin shot the cover, for example, while Matthew Hranek, who is CNT creative director Yolanda Edwards’ husband, photographed stories inside.

Storywise, CNT has reshaped many of its front-of-book stories to be one-pagers accompanied by oversize photos. Although there are still generally going to be two larger, longer features in the magazine, the bulk of the stories are now shorter, more digestible pieces written primarily by influencers in areas such as fashion, food and travel rather than by the usual stable of well-known travel writers.

The revamp is aimed at jump-starting a magazine that has struggled for the last few years. Newsstand sales have never been a huge factor at Traveler and have been relatively flat for the last five years when one includes digital replicas, totaling 30,613 in 2013, according to the Alliance for Audited Media, compared with 29,749 in 2008. Ad pages have declined for three consecutive years. According to Media Industry Newsletter, CNT’s ad pages fell 10.4 percent, or just over 103 pages, from 2010 to 2013. Last year, pages slid 3.65 percent to 886.54 pages over 2012.

Guzmán is determined to reverse that. When she was tapped by Condé Nast and welcomed by artistic director Anna Wintour to succeed Klara Glowczewska in August, it was her vision that earned her the job. That vision has centered on drawing in younger, affluent readers, as well as parents looking to vacation with their kids — a market she called “untapped” by travel magazines.

When she made her return to Condé from Martha, Guzmán brought on Edwards as creative director to fulfill her aesthetic vision. Jeffries Blackerby, digital editor of Wintour’s Vogue, was appointed deputy editor in November, and another Martha alum, Carl Germann, joined as managing editor a month ago. Following a period of instability due to defections in its fashion department, CNT recently added fashion director Margaret Mann from Glamour.

Although it is still in flux — CNT’s Web site will get an overhaul this year — the magazine appears to be turning things around. It has logged a 10.6 percent increase in ads, amounting to a 21.91-page jump for the first-quarter of the year, according to data from Publishers Information Bureau.

“The travel category is coming back,” cheered publisher Bill Wackermann, who declined to speculate on what went wrong at the magazine before he landed back at CNT in August.

“There wasn’t something wrong, something changed,” he said, referring to the economic downturn. To remedy his woes, Wackermann, like many publishers, is turning more heavily to the luxury segment.

But the question remains: Were CNT’s woes symptomatic of the ailing economy or of the magazine? For what it’s worth, rival Travel & Leisure pulled out an 8.36 percent jump in ad pages to 1,049.20 in 2013.