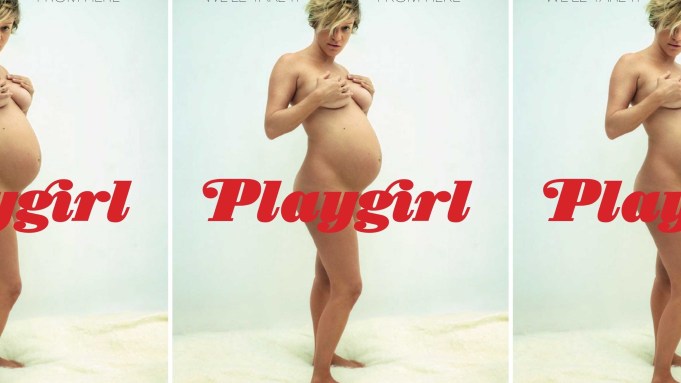 While many magazines, including Playboy, are going out of print, one is coming back — but not as we last knew it.

Playgirl Magazine is relaunching in print on Monday, looking very different from its last issue in 2015 when it featured “campus hunks of Fort Lauderdale” — four men flexing in their swimming trunks in between several plastic-looking trees and what appears to be a hot tub filled with an odd shade of green water.

This time, the cover star is not a man, but a pregnant Chloë Sevigny, expertly shot by Mario Sorrenti against a backdrop of lush mint green hues and not a plastic tree in sight. Above her is the caption “we’ll take it from here.”

Beginning as a feminist response to Playboy in 1973, in between the male centerfold and other naked men, Playgirl tackled important issues such as abortion and equal rights, while contributors included Gloria Steinem, Maya Angelou and Joyce Carol Oates, making it a dominant voice in the women’s movement and the sexual revolution. It also built up an army of gay readers.

Now the title is back in another incarnation, but it’s closer to its beginnings than when Playgirl ceased print operations in 2015, according to publisher Jack Lindley Kuhns, great-grandson of Eugene Meyer, who purchased The Washington Post in 1933.

Lindley Kuhns went to boarding school with Ruderman’s son and he and his father approached the-then 26-year-old in 2016 to see if he would be interested in acquiring the publishing rights to the title. It turned out to be the early issues that interested him in closing the deal, of which financial terms have not been disclosed.

“I didn’t know it was a feminist magazine. All I knew was the things that we would see on TV that was not anything of quality or important. But when I finally got my hands on the old issues it shocked me because it was very much entertainment for women in a big way in the sense that not only was Maya Angelou a monthly contributor for the first couple of years, but there were so many categories — fashion, art, editorial,” Lindley Kuhns said in an interview. “When I looked at it….the only thing I could think is this magazine could be elevated in a way to make it so beautiful and so relevant.”

So, after spending the past few years in negotiations, conceptualizing a relaunch, and assembling a team to shepherd ​Playgirl​ back into the world, he’s ready to unveil his version, which seeks to “pay homage to its 1970s sexual revolution roots, and relaunches the brand as a forward-thinking voice, celebrating all aspects of the modern feminine experience.”

As for the photography, there’s work such as “Power. Play.” by Harley Weir, showcasing the 21st century’s paradigm shift and serving as the magazine’s centerfold; “Midlife” by Elinor Carucci, highlighting the realness of aging, and The New Sexy by Myla Dalbesio, challenging outdated ideas of beauty.

But unlike the original, which was criticized for the lack of diversity in its pages, the magazine’s approach is “gender- and trans-inclusive, intergenerational and strives to reflect the diverse, dynamic array of women’s experiences.” “I’m really proud of how diverse our body types are in the issue — whether it’s in the centerfold or in fashion,” said Lindley Kuhns.

On the business side, Lindley Kuhns originally hoped to produce two issues a year, but the pandemic has meant there will likely be only one for the time being. For the first issue, there will be a limited 2,000 copies available, priced at $20 each and available on newsstands mainly in New York and London and to order online.

There are no advertisers in the launch issue, but Lindley Kuhns said that doesn’t mean there won’t be in future issues. “It was hard enough getting people on board and trusting that we were going to make something as quality let alone taking the effort and energy to get funding from the people that we would want,” he said. “In the future I wouldn’t be turned off by advertisers but it would have to be the right one….Everything has to be appropriate to what we’re saying or displaying.”

While all this begs the question of how will it make a profit, he disclosed that while issue one will operate at a loss, “bringing back Playgirl Magazine in its original print format has always been a fundamental part of the vision.”

“Behind the scenes we are building a media entity that will ultimately broadcast and amplify the voice of the brand, while simultaneously financing the magazine,” he concluded.