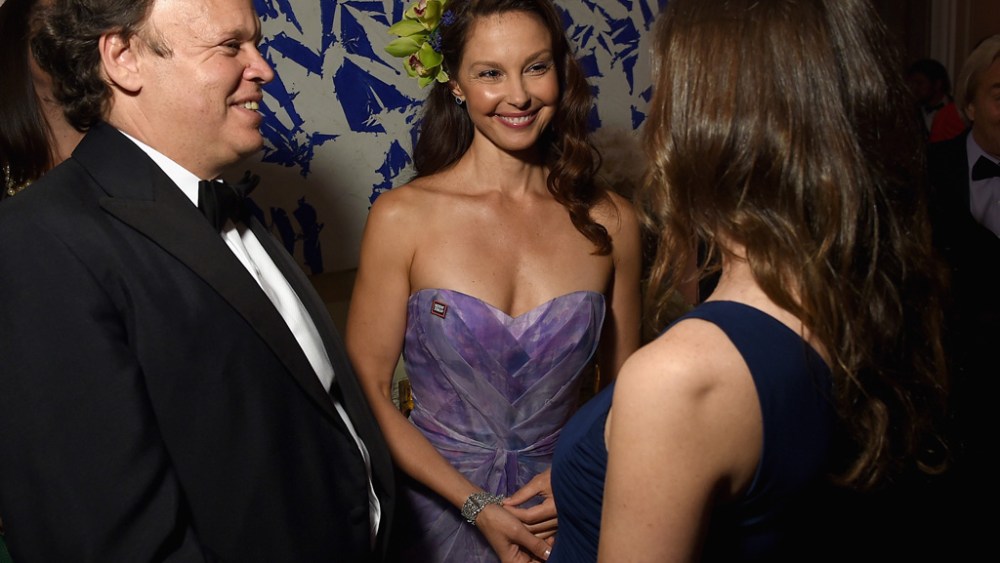 It was a cool, overcast weekend in Washington D.C., the destination for journalists, celebrities, politicians and new media execs, who came to toss back a few drinks, party and, if lucky, attend the White House Correspondents’ Dinner on Saturday night.

“As a public company, Time Inc. now gets to set and chart its own course,” he said. “What’s difficult about being a public company is that everybody tries to manage the quarterly earnings. The reality is you have to manage for the longer term.”

At The New Yorker party, which was held on the rooftop bar at the W Hotel a few blocks away, David Remnick’s wife Esther escorted Lena Dunham around before heading to her husband’s concert. Thoughts of a high-minded violin concerto sprang to mind.

“He plays the electric guitar,” the editor’s wife said flatly.

Many of Remnick’s DC friends were buzzing about seeing him perform later that night.

“I play with this band every once in a while at this rehearsal place in Brooklyn,” Remnick said. “I played with them once in public at the Century Club because somebody asked, which felt like playing in the fanciest rec room in America. Now we’re playing at this thing at the Fairmont Hotel for some sort of an environmental cause run by the keyboard player of the Rolling Stones.”

Remnnick added: “So we played with him this afternoon, and what you discover is, he’s a lot better, There are four or five bands each playing a half an hour. We’re going on last.”

“I heard you are in a rock band?” said Clarence Page, who walked by and slapped Remnick on the back.

The seemingly ubiquitous Couric, left The New Yorker party, after a long night, and was spotted taking off her shoes in the elevator, only to put them back on moments later when the doors opened to the lobby level, so she could pose for fans.

Smith would also make an appearance at Tammy Haddad’s brunch the following morning, and later at the Vanity Fair/Bloomberg after party. When asked why he was in D.C., he said he was there to secure White House accreditation for Vice, which plans on opening a bigger office in the city in preparation for coverage of the 2016 elections. He added that the company is expanding to other markets, such as San Francisco and Miami.

“We’re going to be doing everything,” he said. It is rumored that Vice will also unveil a television deal, and that the announcement will likely break during the week when the company unveils its programming for the year at its newfront presentation.

Sophie Turner’s sighting caused a stir, as a group of fans huddled around the Game of Thrones actress, prompting one dejected partygoer to say: “I was trying to take a picture of Sansa from Game of Thrones, but Katie Couric kept getting in the way.”

“With an election year, I’m going to do some stuff,” he said. “But exactly what and what form it takes, I’m going to have to think that over this summer.”

On the topic of presidential elections, Albright said she “talks to Hillary [Clinton] all the time. “She’s a wonderful campaigner.”

After the dinner VIPs braved the rain and headed to the Vanity Fair/ Bloomberg party at the French Embassy. There, in the covered tented area, Bradley Cooper kept Irina Shayk company as she smoked an e-cigarette, while familiar faces like Arianna Huffington, Jane Fonda, Nancy Pelosi, Samantha Power, John Legend and Laverne Cox moved in and out of the adjoining rooms. Charlie Rose was in deep [and very close] conversation with Ashley Judd by the dessert bar, while camera flashes followed Naomi Campbell, who delighted guests in a structured, red, sleeveless number.

“You had the best scenes on Empire,” gushed one partygoer; another: “You look 15 years younger than you are.”

“Walking Dead” actor Norman Reedus looked on, preferring to talk about Cecily Strong, who gave the final speech at the Correspondents’ dinner.

“She was great. I thought she was great,” he said. “Why? are you friends with her?”