Porter Magazine Launches New Podcast ‘Pieces of Me: My Life in 7 Garments’

The 50-year-old human rights activist was staring at a photograph of her younger self during the Eighties where she was sat at a table in her home country of Iraq, looking very demure in a pink puffy cupcake dress.

It was one of seven photographs Salbi showed the intimate audience that included designer Donna Karan and makeup artist Gucci Westman at the launch of Net-a-porter-owned Porter magazine’s new weekly podcast series, “Pieces of Me: My Life in 7 Garments.”

In a conversation with Porter magazine editor in chief Sarah Bailey, Salbi described her outfits in each photograph as a way to recount her life story. The pink dress, she explained, was the result of her protesting years of subservience as part of a wealthy Iraqi family forced to have a friendship with Saddam Hussein out of fear.

As a teenager, she started to challenge this life by dressing all in black, wearing no makeup and becoming engaged to a member of the resistance, who she believed would help her break free from what she described as a golden cage. It turned out, though, that this man simply used her to get close to Hussein and after that point she decided to stop resisting and told her mother she would do whatever she wanted.

“I decided that I was going to surrender. It was a turning point in my life. I tried to resist and it didn’t work. So I went to my mom and I said ‘OK, I will wear what you want me to wear.’ I remember she got so excited. She made me that dress and she put makeup on me,” she said, adding that her mother believed she was finally starting to become like other girls.

“But I felt like a clown and that I lost my spirit. I wore that clown’s dress to be accepted and to surrender my will and power and say ‘OK, I’ll do whatever you want me to do because I don’t know what else to do,’” Salbi added. “It was perhaps one of the most depressing moments. I felt everyone was staring at me. I felt awful.”

Her demure face in that photograph was down to her being scared, with the table being surrounded by security guards as her family’s every movement was closely monitored, she further explained.

Salbi’s surrendering led to her mother arranging a marriage with an Iraqi man who lived in America, who ended up being sexually violent and mentally abusive. She eventually managed to escape, setting herself on a journey that would see her become a celebrated human rights activist and founder of the nonprofit humanitarian organization Women for Women International.

The podcast, hosted by Bailey, will launch on March 11, featuring life reflections from seven women who recount defining moments from their lives through the clothing they wore at the time. Guests include actress Tracee Ellis Ross, model and activist Halima Aden and artist and director Sam Taylor Johnson. Salbi is featured in episode four. 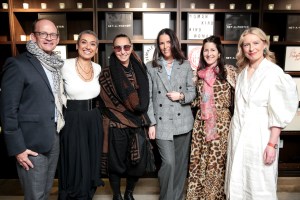 Ross opens up about her childhood, her Golden Globe win 44 years after her mother Diana Ross won hers, visiting the Obamas at the White House, and her unapologetic joy of dressing up, while artist Sam Taylor Johnson delves into her archives.

“‘Pieces of Me’ reminds us that clothes are never just clothes and that the meanings woven through them — about beauty, power, identity, freedom and fashion as a force-for-change — are the stories of women’s lives,” Bailey said.

The launch of “Pieces of Me” follows the announcement of enhancements to Net-a-porter’s content proposition last year with an even greater investment in digital and video, as it reduces the frequency of its print title Porter to twice a year.

At the same time, Mr Porter, Net-a-porter’s men’s arm, has launched a new and enhanced version of its online digital magazine The Journal and is gearing up to unveil its new podcast series The Details later this month.

As first reported by WWD last year, the retailer said it has been witnessing an “explosive growth” in digital consumption and engagement and, in response, plans to open new video studios and editing suites in a bid to produce socially led content with speed and agility.