It was power night in Manhattan Wednesday as both magazines celebrated their own “Most Powerful” lists.

By Rosemary Feitelberg and Alexandra Steigrad on April 18, 2014
View Slideshow 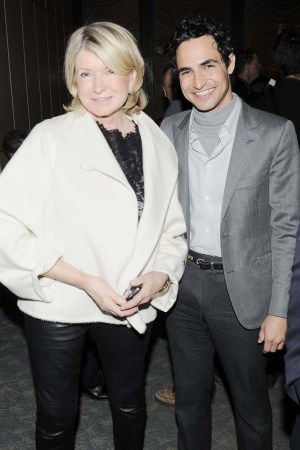 POWER PACK: It was power night in Manhattan Wednesday as The Hollywood Reporter and Fortune magazine celebrated their own “Most Powerful” lists — always a favorite feature of publishers eager to drum up advertising against them.

In one corner, THR celebrated its “35 Most Powerful People in Media” with a party at that power restaurant the Four Seasons. In the Pool Room, Harvey Weinstein chatted in the corner with Janice Min, copresident and chief creative officer of THR and Billboard, while list members CBS chairman and chief executive officer Les Moonves and Condé Nast artistic director and Vogue editor in chief Anna Wintour both posed for photos and made quick tours around the room before making early exits.

Designers Gilles Mendel, Zac Posen, Jenna Lyons and Cynthia Rowley made lengthier appearances, while Fox’s Bill O’Reilly and Megyn Kelly hovered not far from the door, deep in conversation. Their new Fox colleague Maria Bartiromo sang the praises of her employer, adding that since she’s joined the network, she’s brought a twist to what she called “academic” Sunday morning news coverage. “No one ever connects the dots. It’s about the economy, it’s about jobs,” she said. “They [competing Sunday shows] only talk about it in an academic way. I’m bringing businesspeople into the conversation.”

While the room did not lack star power — Alec Baldwin, Susan Lucci, Arianna Huffington, Martha Stewart, Clive Davis and Patrick Stewart all made appearances — one of the most talked-about guests was “Growing Pains” actor Alan Thicke.

Thicke, who was there with Tanya Callau, whom he referred to as his “hot, young Latina wife,” publicized his new reality show “Unusually Thicke.”

When asked what is the most surprising thing about the real life of American TV’s dad, Thicke offered, “My eldest son owns a medical marijuana dispensary.”

In the midst of Fortune’s Most Powerful Women dinner the same night, one waiter warned another, “If any of these people don’t have their water glasses refilled within minutes, we’re going to hear about it.”

The servers weren’t the only ones with a good read on the crowd. Samantha Power, U.S. Ambassador to the United Nations, not only addressed the devastation in Syria, the horrors in North Korea and economic sanctions levied against Russia in the wake of the ongoing upheaval in the Ukraine, but also what it’s like to be a double-fisted BlackBerry mother of two. Petra Nemcova, CBS’ Gayle King, NBC’s Deborah Turness, Savannah Guthrie, Federica Marchionni, Lesley Stahl, Norm Pearlstine and Huma Abedin were others in the crowd.

“I feel good about my ability to be completely present within the context of also being a person who also has two BlackBerrys with them at all times. So you’re familiar with that kind of full presence. So bath [time] is a nice sacred BlackBerry-free zone just because how many have been ruined. You don’t want to miss the call, but you want to be fully there. Luckily, I have a great team, so usually I’ll get an actual telephone call if I need to break away,” Power said.

With her elder child, who is almost five, she tries to tell him what she’s doing at work within limits. He is hip to the fact that all these international dealings are what keeps Power away at times. “So I’ve gotten ‘Enough Ukraine — it’s Ukraine, Ukraine, Ukraine,’” she said.

But a recent parent-teacher conference revealed that he is listening intently. “One of his very dear friends, two weeks ago, was trying to take the toys he was playing with and try to create some sort of structure. And my son, I would never guess is capable of this, said, ‘You’re just like Putin. It doesn’t belong to you — it’s my toy,” Power said. “And I was like, ‘Score.’”

As an ambassador at large in Haiti, Nemcova, who spends about 45 percent of her time there, also spoke of foreign affairs. “Haiti is now the safest country in the Caribbean based on casualties per 100,000 people, and it has an economic growth of 4.3 percent,” she said. With the help of corporate partners like Clinique and Chopard, Nemcova said her nonprofit Happy Hearts Fund’s goal is to build 100 schools in areas impacted by natural disasters this year.