Chinese pop megastar Kun is the protagonist of the campaign.

As part of a long-term program of special campaigns, Prada creative director Miuccia Prada asked Fei to develop an artistic project, which explores the concepts of idolatry and adoration in the social media age.

Titled “Code Human,” the campaign, which includes a short film and a series of images evoking sci-fi movies, is set in a futuristic scientific laboratory where Kun, a 20-year-old Chinese pop megastar with more than 22 million followers on Weibo, discovers different avatars of himself wearing several looks from the Prada fall 2019 collection.

“Upon reflection, nobody is as crazy as Miuccia Prada to think of this pairing, asking a Chinese artist to photograph a Chinese ‘idol.’ I was excited for many days after I received the proposal, not only because of Cai Xukun, but about the project itself, to have this opportunity to plumb these cultural depths, using a real-life ‘idol’ to communicate with the tens of millions of followers behind him. As an artist, you cannot ignore those who stand behind him, how should I represent somebody else’s idol?,” asked Fei. “Cai Xukun has already become a symbol of this era of influence, whether it’s the messages of love or criticism from different groups or the chain reaction he causes on the Internet. Deng Xiaoping [late Chinese politic] once said: ‘It doesn’t matter if the cat is black or white, any cat that catches mice is a good cat.’ Kun’s success is not accidental, what he says or doesn’t say, does or doesn’t do, the world spins of its own accord. ‘Influence’ is such a thing, it can nourish you or harm you, it can generate capital, and also love and hate.”

Fei also highlighted the fact that she set the story in a “Post-Anthropocene” era, where the different avatars of Kun are on show in glass cabinets for visitors.

“The concept of ‘Post-Anthropocene’ is an extension of the ‘Anthropocene’ era posited by the Dutch atmospheric chemist Paul Crutzen, who won the Nobel Prize in 1995. ‘Anthropocene’ is a proposed epoch, akin to the Cretaceus Epoch, the Pleistocene Epoch, the Holocene Epoch, to describe a geological age. Man’s behavior in the past century has created a geological epoch vastly different to the ones before, manmade materials such as aluminum, plastic and concrete have seeped into the depths of the earth’s strata and human activities have had a devastating impact on the climate, sea levels and the extinction of various species. In this case, what comes in the “Post-Anthropocene” era?,” Fei said. “In a lot of sci-fi films we have seen different imaginings, an era where we are not consuming the earth’s energy reserves, where existence lies upon data at its core. The paradox is found in who controls the data source versus the emergence of the super-human. Kun in the film is a man-made specimen, he emerges surrounded by walls of data, in a laboratory, scientists input a whole new memory into his body, in a super-machine, a new digital body is being printed out where people can craft a being as perfect as an ‘idol.’ Will this be an ideal era? Like the ending to many sci-fi films, all we are left with is a question mark.” 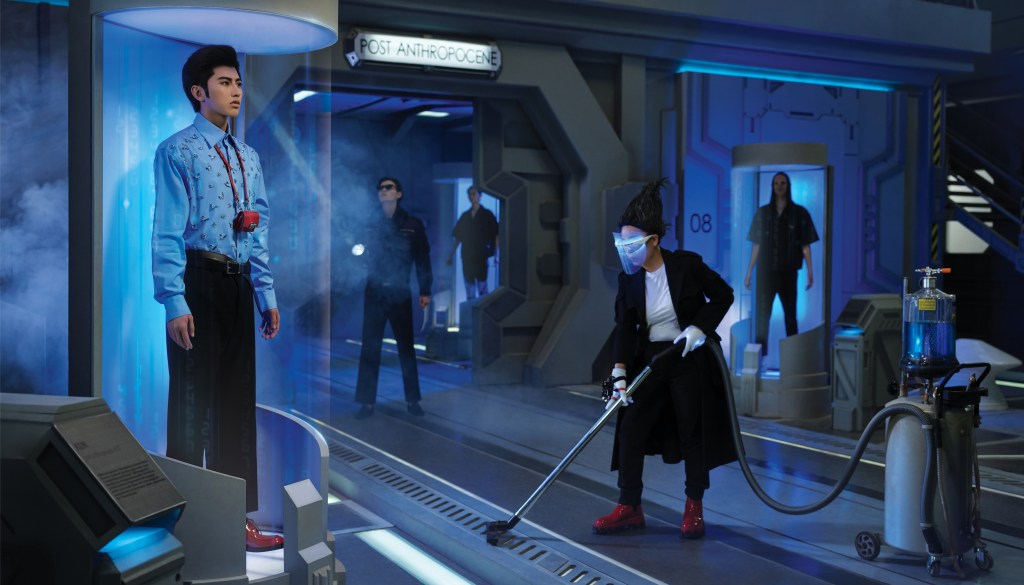 Fei and Miuccia Prada’s relationship dates back to 2007, when they first met at the Venice Biennale international art exhibition.

“In 2007, at the China Pavilion in the gardens at the Venice Biennale, Mrs. Prada was standing beneath a large tree next to my installation piece, looking very chic in a beige summer suit. She smiled and asked me if I was Cao Fei, before introducing herself and expressing an interest in my work, inquiring a lot into the questions of the virtual age that it addressed,” Fei said. “Not long after, I was installing an exhibition in Lyon, France, when she wrote and asked if I had time to meet. I was brought straight to a coffee shop next to the Fondazione Prada in Milan. We talked for an hour, about art, artworks and her view of the world now. She is intrigued by what goes through an artist’s mind and the world that is reflected through their works. She is almost child-like, stubborn, with a dazzling smile. She is not an elegant aristocrat, her whole being is infused with rebellion, deconstruction and disruption, just like the Italian women you see in the films of Fellini. You can tell from the exhibitions that her art foundation has staged for the past twenty-something years, that her admiration for art, philosophy and architecture are all reflected in the ethos of her brand.”

The Prada fall 2019 men’s campaign developed by Fei will make its official debut on June 1.