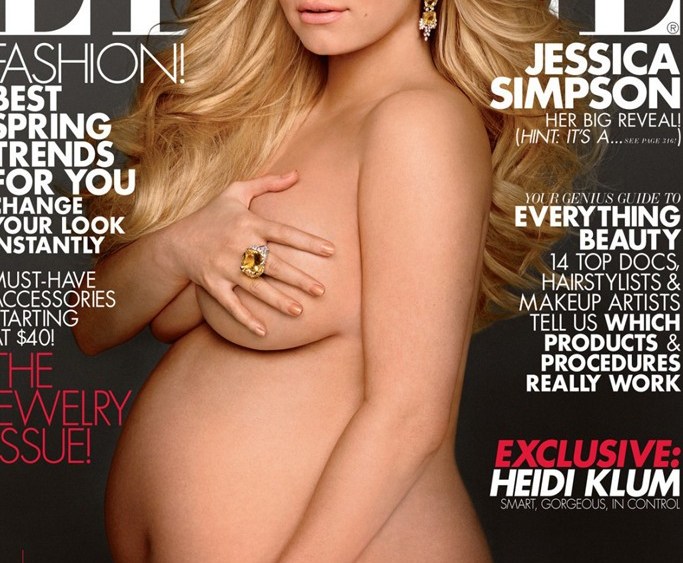 NAKED NUMBERS: It’s been 21 years since Demi Moore’s naked pregnancy pose appeared on the cover of Vanity Fair and it appears magazine editors still can’t get enough of it. The latest entry: Jessica Simpson, wearing nothing but a seductive stare on the April cover of Elle.

But if one takes a closer look at the newsstand numbers, it’s hard to understand why the cover concept has lasted so long.

While it’s true that Moore’s August 1991 Vanity Fair cover, shot by Annie Leibovitz, was the title’s best seller of the year with 548,058 copies sold, no magazine has come close to beating — or meeting — that figure.

W magazine published its own take of the famous Leibovitz photograph for the June 1999 issue and it sold 72,358 single copies, making it the fifth best selling issue of the year for the magazine. In 2003, Leibovitz shot Brooke Shields for the cover of Vogue in a pose that almost mirrored Moore’s, except the actress was wearing a sheer dress. At this point, magazine readers had seen this kind of thing before and the issue, which sold 440,353 copies, was also the title’s fifth best seller of that year.

For its August 2006 issue, Harper’s Bazaar decided to take its turn with the naked and pregnant pose. The Hearst title had photographer Alexi Lubomirski shoot Britney Spears and it was the seventh best seller of the year, with 165,229 copies sold at newsstand.

At this point, it seemed the pose guaranteed mediocrity in the magazine cover game. Marie Claire made it work again, though. The magazine’s January 2008 issue with Christina Aguilera sold 333,236 at the newsstand, the fourth best seller of the year and even more noteworthy, since the January issue tends to be leaner than most.

Life & Style asked Mariah Carey to be photographed pregnant and unclothed for its April 18, 2011, issue and the pose went right on back to mediocrity, selling 324,000 issues, below the average that half of 334,700. And New York Magazine, which featured an older woman in the standard pose and asked readers, “Is She Just Too Old For This,” sold 13,950, just below the average during the second half of 14,204.

While it’s too early to tell how a naked Simpson will sell for Elle, one thing seems to be clear: editors need to come up with a new schtick.