Radar Looks Back to the Future

NEW YORK — Maer Roshan wrote the editor’s letter in the first issue of Radar magazine on March 19, 2003 — the first day of the second war against Iraq.

Roshan cites this fact to emphasize how much has changed since then, and... 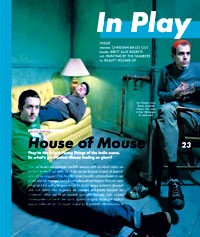 NEW YORK — Maer Roshan wrote the editor’s letter in the first issue of Radar magazine on March 19, 2003 — the first day of the second war against Iraq.

Roshan cites this fact to emphasize how much has changed since then, and why he’d rather Radar’s return in May not be labeled a relaunch. “It’s a new magazine because it’s a new world,” he said.

But to look at pages from the prototype, one might think two months had elapsed, not two years. In terms of its editorial mix and tone, this is very much the Radar readers have seen before — glib, snarky and obsessed with pop culture and politics.

The major difference is art director Lisa Steinmeyer’s design, which Roshan described, accurately, as “more streamlined and sophisticated.” He termed the former look “ironic tabloid,” noting that the irony was lost on many. “Suddenly we were being grouped in The New York Times with Us and In Touch,” he said.

To combat the tabloid associations, Radar will utilize more original photography and less pickup art, a luxury it can afford now that real estate mogul Mort Zuckerman is paying the bills. Zuckerman, together with financier Jeffrey Epstein, took a stake in Radar in October, reportedly injecting up to $25 million to launch the title — although Roshan is mum on how much “up to” Zuckerman provided. The plan calls for an initial rate base of 150,000 and four issues in 2005 — assuming the launch date, recently moved back to the last week of May, holds firm.

Like its forerunner, Radar will have sections for political news and culture, as well as a new section, The Goods, on consumer culture, viewed “as a journalistic or sociological enterprise,” according to Roshan. Regular columns will focus on media, fashion and Hollywood. The premiere issue will feature a profile of a major fashion designer and an exposé on American soldiers serving in Iraq. Contributors will include Barneys New York creative director Simon Doonan, former Colors editor Simon Dumenco and marketing guru Adam Hanft. Several of the magazine’s columnists will also write for Radar’s Web site, which goes live in late March or early April and will feature fresh content daily, including gossip.

As for Tina Brown, Roshan’s mentor and former boss, Roshan said she plans to write but has not committed to anything specific.

Brown’s most valuable gift may have been the lesson she provided by overhyping the launch of Talk, a mistake Roshan came close to repeating during Radar’s first go-round. “I’m hoping this magazine will be able to rise up more organically, without all that craziness,” he said.