With the state of most magazines today, that in itself is a feat, but media types have been doing some grumbling since Jones’ editorial debut in March 2018. The covers have been less glam, the stories inside less juicy, the unrepentant tinge of high-end gossip that devotees expect less constant, some have said. But Vanity Fair is also a magazine operating under a new editor in chief (new to the magazine and to the role) and new budgetary constraints at what could now be termed the New Condé Nast. So the reasons are many for the clear changes to a magazine run by Graydon Carter for 25 years. Although plenty of the changes do boil down to the fact that Jones — relatively young; female; woman of color; Condé neophyte — is in charge now.

“I did feel it was a responsibility to bring the magazine firmly into the present, into the future, if at all possible,” Jones said, sitting on the rooftop patio of the Four Seasons Beverly Hills.

She’s in Los Angeles for a few days, hosting VF’s annual summit and planning to be on the set of a weekend shoot for the magazine’s all-important Hollywood issue. She won’t give away any details on the February cover, except an emphatic “yes” when asked if this year’s cover will look any different from the usual foldout of film and TV talent standing next to each other, wind machine blowing, in a muted palette of red carpet dress. Jones is here to talk about her first two years helming the magazine anyway, and she hews to the subject.

She brings up her first cover, Lena Waithe, showing the writer from the chest up in a white T-shirt, apparently no makeup, a soft but unsmiling stare, gray background, and that’s all. Before that cover were Carter’s last three issues, the typical Hollywood Issue in February, Emily Blunt in full old-Hollywood glam mode in January and Jennifer Lopez and Alex Rodriguez in December with a cover exclaiming simply “J-Rod!” The Waithe cover was a complete 180, and people noticed.

“Part of the decision [to depict Waithe on the cover] was I felt here’s someone who represents a lot of what is promising and great about contemporary culture…and it was exciting to think about her as a representation of what VF could be,” Jones explained. “What I thought about a lot is one of the core proponents of VF is it’s aspirational and what I felt was that aspirational is not static, it evolves and changes and I want to be able to capture a lot of different kinds of aspiration.”

Although Jones says firmly that VF “has never been in the business of putting clothes on models,” it’s certainly been in the business of putting clothes on celebrities, and more than white T-shirts. But she defends her decision to take a much starker turn all at once as more modern, a move away from nostalgia, a sentiment she wants nothing to do with. So she went with Idris Elba in a T-shirt and a leather jacket, Kendrick Lamar in a hoodie, Michelle Williams in a conservative sweater — all lacking a smile or even a smirk.

“I mean, who looks better in a tuxedo than Idris Elba, but I thought let’s see him looking different,” Jones said. “For Michelle Williams, shortly after that cover came out I went to Milan and Paris [for the shows for the first time] and I had lunch with Donatella Versace, which was great. And she was like, ‘I love that Michelle Williams cover. That is what a woman looks like in the modern world.’” 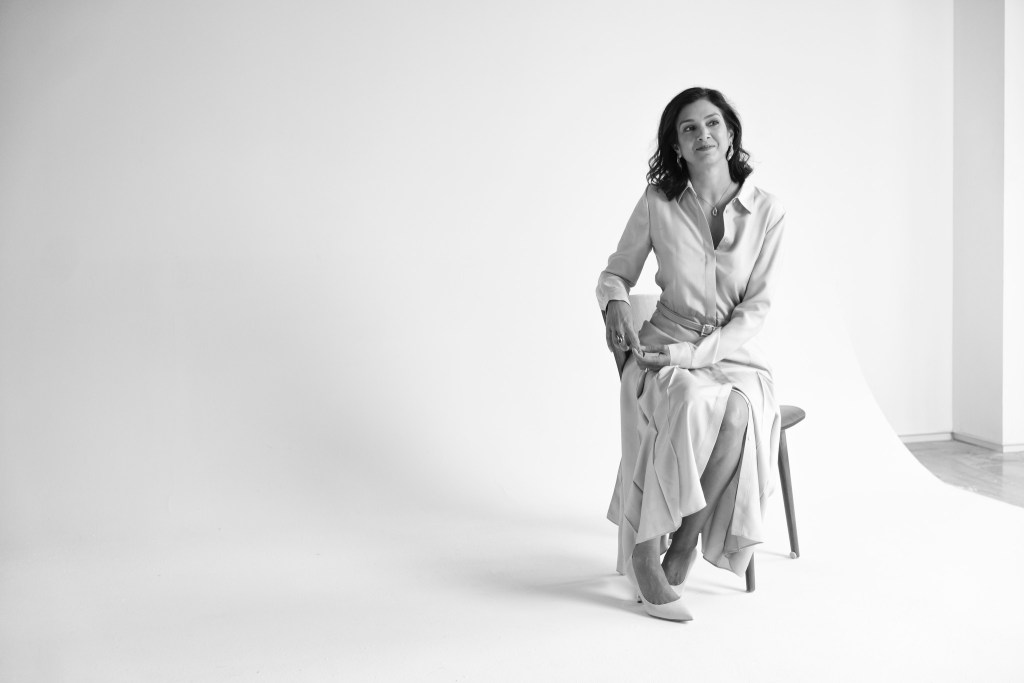 So Donatella is a fan. And the magazine’s stats seem to be changing. Jones boasts her readers are getting a little younger, more engaged, more diverse and with a slightly higher household income. Followers on social media are up, too. VF’s May cover featuring short-lived presidential candidate Beto O’Rourke shot by Annie Leibovitz brought the site its most trafficked month with 25.7 million unique views. O’Rourke saying publicly after the issue came out that he regretted doing the cover at all as it “reinforced a perception of privilege” likely only helped the numbers and it remains the site’s most visited cover story. July was also a good month for traffic, 23.8 million views, with two covers of Daisy Ridley and Adam Driver on the set of “Star Wars.” Though they looked much more like movie promos than editorial covers, VF got an exclusive story on the upcoming installment of the “Star Wars” saga. Jones said subscriptions are up a bit, too, driven by digital, as VF is among the few Condé properties with a real paywall strategy.

Even with some quantifiable successes under her belt by now, there is still a sense in media circles that the magazine is not as lively, exciting, enticing, as it has been over the years, even as Jones seems to be moving away from her initial stark covers to a softer type of more visible glamour. Still one not led by traditional (i.e., male) ideas of sex appeal, however. See this year’s cover of Nicole Kidman and a family shoot of Chrissy Teigen and John Legend. Both of those covers look like they’re from a different editor altogether, compared to the Waithe issue. Sure, media naysayers may be old or set in their ways or simply enjoy rooting for competitors to fail, but Jones admits that she’s still finding her way at VF and that the criticisms have indeed reached her.

“Any editor, you wake up in the morning and think, ‘Oh, why didn’t I do that better, how can we do that better next time.?’ That’s a natural state of being, so criticism from the outside world kind of slots into that.

“I’m old enough to know that you don’t always get it exactly the way you want it the first time,” Jones continued. “The creative process, it is a process, but I am super happy with what we’re doing.”

And she says her boss, Anna Wintour, to whom she reports directly, encourages her to try things out, see how they land, and find her own rhythm and style as an editor in chief.

“That’s her whole m.o.,” Jones said of Wintour. “She wants people to be fearless and she wants people to make their own choices and she’s been incredibly supportive, from the moment I met her. But she has a high bar.”

The most recent covers (Teigen and Legend, Lupita Nyong’o and Joaquin Phoenix) Jones is particularly pleased with — they look much different than most of her 2018 covers, more color, more relaxed, a little more playful. But there is a feeling in speaking with media folks — p.r.’s, reporters, even a few members of her own staff — that Jones is getting more criticism within the industry than men who have recently been given broader magazines to run. Like Michael Sebastian at Esquire (Hearst) and Will Welch at GQ (another Condé title). Even if people don’t like everything she’s done, still more observers don’t feel the incessant chatter flowing through the New York media rumor mill about her job stability and her salary are quite fair.

Asked bluntly if she feels the criticism leveled at her version of the magazine has anything to do with her being a woman, she turns the question around, a little annoyed but friendly, which she is. “You’re a woman, do you ever really know when something is gendered and when it isn’t?” She quickly admits that, yes, one can “puzzle it out,” but is adamant that whatever criticism she’s hearing isn’t acted upon.

“I will say that I make the choices I make because of who I am, so to the extent that people think I’m not the right fit for the job or whatever…” she trails off.

Speaking of who she is — as in the only current female editor of a general interest magazine and one of only a small few in history (who include Tina Brown, the first editor of the modern version of Vanity Fair and the only woman to edit the New Yorker) — Jones in this context is aware that she’s in some kind of rarefied, gendered air. So how does it feel to be in such a position? She hesitates and says she’s hesitating “because it makes me feel a lot of different things.” Ultimately, she decides to say that being the person she is and the editor of Vanity Fair has given her the added privilege of “being a role model for other women.”

“I say ‘role model’ only because other people say that to me and it never occurred to me that would be the case. And I feel like if I can help someone, another woman, another woman of color, feel like maybe she could do something she didn’t know she could do, I can’t really ask for anything more.”

But this, too, is new for Jones, as are thoughts on what kind of leader she wants to be, and how much her identity does and should influence the type of work she’s doing now.

“We’re much more conscious of who our gatekeepers are and who our pundits are and I now hold some of those positions and to be conscious of it is almost a responsibility at this point,” she said. “But it’s not like I approach every decision like, ‘As a woman I’m going to choose this layout.’ You can’t compartmentalize yourself like that.”

Jones is trying to find some cross section of herself and Vanity Fair that works, consistently. When she does, it will likely still be one that doesn’t even attempt to satisfy the male gaze. She told a story of being young in grade school and finally getting glasses because she’s nearsighted. She remembered putting them on in class for the first time and looking outside at the trees.

Her point is the inherent subjectivity of everything, with running a magazine being no exception.

“I know for me,” Jones said, “my gaze is female, my gaze is being expressed in 2019, with all of our current context around us, and that’s how you have to operate.”