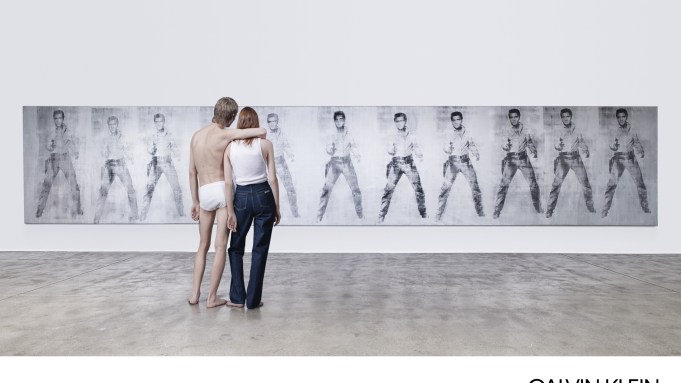 Continuing to drop hints online about his direction for Calvin Klein, Raf Simons has unveiled a spring campaign for underwear and jeans that juxtaposes those iconic items with modern and contemporary art.

Released today on Calvin Klein’s web site and its own social channels, the ads showcase archival denim, a cotton tank top and quintessential men’s briefs in playful contrast with works from the second half of the 20th century. The clothes strike up a conversation with the art — much the way designers and artists in New York’s Pop heyday — on the streets of SoHo or on the dance floor of Studio 54, the company said.

Works by Andy Warhol, Dan Flavin, Richard Prince and Sterling Ruby are featured, photographed at the Andy Warhol Museum in Pittsburgh and the Rubell Family Collection in Miami.

Simons, chief creative officer of Calvin Klein, is well known for his passion for art.  “It’s a celebration of Calvin Klein’s iconic underwear and jeans, acknowledging their status as Pop and showing them in the world of art,” he explained.

Pieter Mulier, creative director of Calvin Klein, added, “Looks were specifically chosen from the Calvin Klein archive for the campaign; it’s both a recognition of design firsts and the photographic history of the brand that made these garments famous.”

The eight advertising images were photographed by Willy Vanderperre and styled by Olivier Rizzo, featuring a largely unknown cast.

One ad, for example, features a guy in jeans standing in front of a 2,000 joke painting by Prince. It reads: “A guy goes to a psychiatrist wearing only Saran Wrap. The psychiatrist says to the guy, I can clearly see your nuts you nut.” Another shows a guy in a pair of jeans and taking off his white T-shirt and standing in front of Warhol’s 1976 “Skull” painting.  And a third shows a guy in underwear and a girl in jeans and a white tank top admiring Warhol’s “Elvis 11.”

Each of the ads features a description of the artwork and a snippet about the artist.

Ads launch this month on billboards, the Internet and in magazines.

Simons is slated to show his first women’s and men’s Calvin Klein collection on Feb. 10.