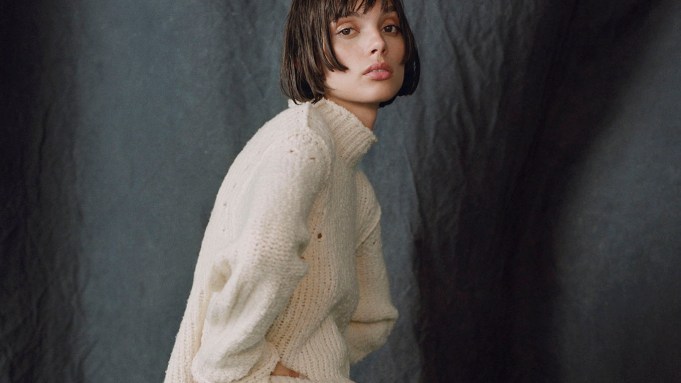 The Force has been with him a long time: Rag & Bone’s Marcus Wainwright has gone from collecting “Star Wars” figurines as a boy to designing a capsule collection to coincide with the release of “Star Wars: The Last Jedi” on Dec. 15.

“I’ve always been a massive ‘Star Wars’ fan personally, and I’m fairly close to the guys as Lucasfilm and Disney for various reasons, and we shot Mark Hamill (who plays Luke Skywalker in the movie) for our Men’s Project last year,” said Wainwright, chief executive officer, founder and creative director of Rag & Bone. “It just felt like it would be a fun thing to do.”

The limited-edition range with Disney comprises of Rag & Bone styles entwined with references to the landmark film series. For example, contrasting colorways and hidden details represent the balance between good and evil in the saga depicting the light and dark sides of the Force, the opposing factions of the Galactic Empire and Rebel Alliance, or the conflict between the Resistance and the First Order.

“That was the big challenge to do a collaboration on some ‘Star Wars’ stuff that felt like Rag & Bone,” said Wainwright, calling the collection loosely inspired by some of his favorite “Star Wars” looks. There are some printed T-shirts, a men’s look loosely inspired by Luke Skywalker and a women’s look inspired by Princess Leia. There are 22 pieces in all of ready-to-wear, footwear, T-shirts and accessories.  One T-shirt says, “More Powerful Than You Can Possibly Imagine,” and another features a graphic of two X-wing fighters.

Quilting, lacing details and military references figure across the range. The men’s offering includes an Obi-wan hoodie and Stormtrooper sweatshirt. For women, there’s a merino wool bouclé sweater with a subtle rolled neck and hems, ribbed texture at elbows, and engineered knit details at the arms that create a minimalist interpretation of military functionality. Footwear consists of RB1 Force high-top sneakers for men and Ellis Force boots for women, while the accessories lineup includes a zip-around wallet, wristlet and card case.

Wainwright noted that Disney initially contacted Rag & Bone to work on a project  for “Rogue One,” but the timing didn’t work out. He went to the set at Pinewood Studios in Buckinghamshire and met the costume designers. “It just naturally came from there,” he said.

According to Wainwright, the movie is shot in “very surreal places that people can relate to.” Military references in the film’s costumes are very similar or identical to the references Rag & Bone uses, such as vintage military pieces.

“They twist it to fit with the films and the themes, and we do the same thing with our collection,” he said, noting that Rag & Bone boasts a big vintage archive. “One of the pieces we referenced is a g-suit, which is something we’ve referenced in our collections which is a laced flying suit. It’s a flying suit that fighter pilots use. It prevents the blood from draining out of their heads when they’re going too fast.”

Over the years, Wainwright said he has referenced “Star Wars” on multiple occasions when designing the line.  “My design team keeps laughing at me. There’s a lot to pull from ‘Star Wars.’ It’s very real. It’s not like ‘Star Trek,’ or any other futuristic space movie. It’s definitely set in the past and set in a parallel dimension, opposed to a very futuristic perspective,” he explained.

Priced from $95 to $1,295, the merchandise will be released in batches in select Rag & Bone stores and online at rag-bone.com, and select pieces will also be available on the newly relaunched shopdisney.com site, beginning Dec. 1. There are only 100 pieces of each style.

The apparel company has also created a Rag & Bone/”Star Wars” secret site which will give viewers access to content created for the collaboration, including a making-of video and other footage and images from the world of “Star Wars,” which is celebrating 40 years of the franchise.

In addition to the capsule, Rag & Bone will support Lucasfilm and Disney’s Force 4 Fashion initiative; a charitable program under the banner Force for Change that was created to empower and improve the lives of children around the world. Rag & Bone will make a donation to Starlight Children’s Foundation, continuing Lucasfilm’s philanthropic message of encouraging fans to be forces of change in their community.

Rag & Bone, Lucasfilm and Disney are to host three events on Dec. 2 in New York, Los Angeles and London featuring surprise elements from the “Star Wars” franchise. Fans will have the opportunity to purchase the limited-edition X-wing, Powerful, Stormtrooper and Aurebesh T-shirts with a new style landing in stores and online each day, beginning Dec. 1 through Dec. 4.

For a look behind the scenes of the making of the Rag & Bone capsule and Wainwright’s inspiration, watch this video.