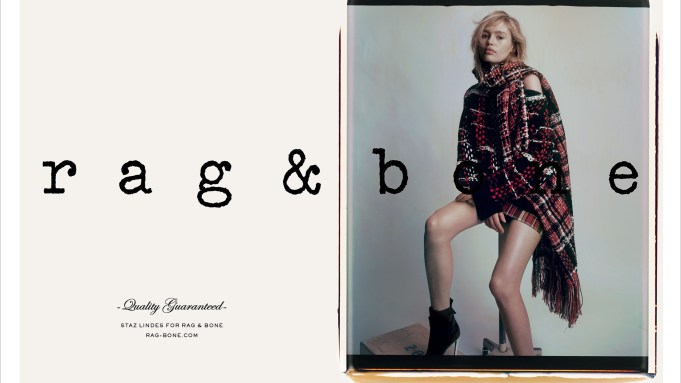 The images, photographed by Glen Luchford, are an extension of the brand’s fall 2017 “Portrait Series” that was exhibited during New York Fashion Week in February. The exhibit, which was curated by Lou Stoppard, featured imagery, film and music that has defined the brand’s voice since its inception.

Over two days, more than 70 people were photographed by Luchford and Frank Lebon using a giant 20/24 format Polaroid camera and film collages. The cast was chosen for their contributions to Rag & Bone’s story so far as well as those who inspire the brand.

“The project was really a labor of love; celebrating those who inspire us and allowing them to express their individuality through Rag & Bone clothing,” said Marcus Wainwright, chief executive officer, cofounder and creative director of Rag & Bone. “We didn’t dictate — but instead gave them the power to style themselves, and it was pretty amazing to see how it all came together. This kind of true collaboration is something inherent to the world of Rag & Bone; you never know what the result will be, but when we work with such incredible people, it is generally very rewarding.”

The images will run in the September issues of Vogue, Vanity Fair and W, as well as out-of-home locations around the world, starting that month.

To coincide with the launch of the fall images, Rag & Bone has released a conceptual video filmed and produced by Mark Lebon, Frank Lebon’s father.  Shot during the portrait series in February, the video is a compilation of behind-the-scenes footage, featuring a selection of personalities from the fall 2017 images.