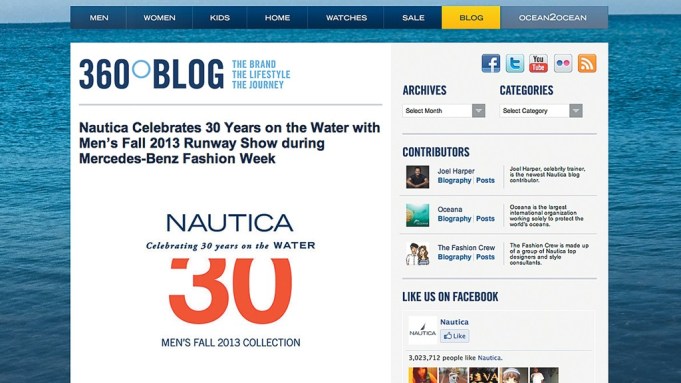 Exactly three years ago, Nautica hit the digital scene, and during the first week of February, the brand reached 3 million followers on Facebook.

Besides the social media platform having the most fans and highest levels of engagement, Facebook drives more traffic to nautica.com than any of its peers, according to Rosalind Drisko, director of marketing and communications at Nautica.

“We could have 150,000 people talking about an item, and when the brand posts something, there can be thousands of likes. We get a lot of insights,” Drisko said, noting that the most popular posts on Facebook are about timepieces. “With watches, it’s a very international audience, and we see a lot of interaction here.”

RELATED STORY: Water in the Forefront of Nautica’s Philanthropic Efforts >>

Behind-the-scenes content — like photos of shows and models — also resonates well with users, and Drisko calls Facebook the “perfect medium” in which to showcase these images.

Nautica saw significant  growth on this channel from 2011 to 2012, going from 550,627 fans in 2011 to 2.7 million just one year later. Last June, the brand toasted reaching 1 million followers with its Nautica Millionth Fan initiative. A Facebook follower designated as the millionth fan attended the spring 2013 fashion presentation in New York.

And as successful as the brand has been thus far on Facebook, Drisko acknowledges that Twitter has been a “bit of a challenge” for the brand.

“A lot of people use Twitter to follow celebrities or news outlets and, for us, it’s a bit challenging unless we’re doing a lot of promotions. People usually want a promotion for something off, which we don’t tend to do on Twitter,” Drisko said.

She revealed that the brand plans a total overhaul of its digital flagship in the coming months — and while small updates were made to nautica.com last year, the site will look completely different come summer.

In addition to enhanced navigation, search and filtering capabilities, the site will contain user reviews and recommendations (a feature not currently available on nautica.com). There will be more of an assortment of product spanning all categories, including men’s, women’s, kids and home, as well as licensed products like watches, eyewear, footwear, women’s swimwear, leather goods, bath accessories and fragrance.

“Product presentation will be better and, in general, [we will] better integrate the brand experience with the shopping experience. [This will allow] more of an integration of content and commerce,” Drisko said.

She added that currently, nautica.com only ships to U.S. addresses, but there are plans to change this.
Nautica launched e-commerce in 2008, and that channel is growing rapidly. Although Drisko declined to reveal the percentage e-commerce generates of overall sales, electronic volume increased 50 percent between 2011 and 2012. She projects the same growth curve for 2013.

Mobile traffic tripled and mobile sales doubled from 2011 to 2012, with the channel representing 10 percent of all e-commerce sales last year. The company only expects this number to grow, especially since 40 percent of Nautica’s e-mails are opened on a mobile device.

A stand-alone mobile app doesn’t exist yet, but about 10 apps have been created on a project basis since 2010, ranging from holiday gift lists to back-to-school bedroom makeovers. The company sponsored a contest (which ended last month) in which one winner will have the opportunity to star in an upcoming Nautica Ocean to Ocean campaign video. Drisko said the winner will be announced within a couple of weeks.

When asked what has been the biggest challenge with respect to digital for the brand thus far, Drisko pointed to two elements.

The first is adapting to the speed at which technology is changing. She cited as an example the rapid pace at which Instagram has become one of the most popular social platforms in the past year.

“This is the place to be, and that’s the one that we’re going to see grow the fastest. Instagram is where we’re trying to do more and more,” she said.

The second is divvying up resources for digital responsibilities.

“Allocating new resources toward digital becomes an additional part of someone’s job, whereas it should have its own team,” she said. A social media manager and digital manager work closely with the e-commerce team, but the brand is looking to increase the size of this group. “At Nautica, we’re currently building a full team.”