The magazine put the writer, actress and producer on its cover because, its editor said, "All the heroes in our universe are people who understand a multi-disciplinary approach." 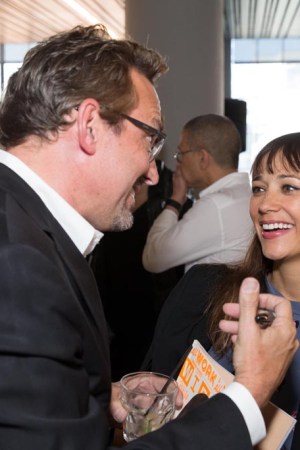 While the task of combating declining newsstand sales might seem more work than play, the former art director, who’s been at the helm for three years, finds it “liberating,” because it allows him to put the best story on the cover. “The cover is the physical object that extends a halo over all the stories we tell,” he said at the company’s newly designed San Francisco headquarters. Fittingly for the tech-centric magazine, 60 percent of ad revenue comes from the digital side, with 40 percent from the print product.

While Wired is known more for tech gadgets than Hollywood stars, the magazine put the writer, actress and producer on its cover because, said Dadich, “all the heroes in our universe are people who understand a multidisciplinary approach, who inspire creativity and innovation through their work. Rashida just fits that to a ‘T.’”

For her part, Jones, who has been living in the Bay Area while writing “Toy Story 4,” says that before she leaves town, she hopes to invest in a tech company — calling it a modern version of Las Vegas or the stock market. “But it would have to be something I believed in,” she added.

While billions of dollars are being thrown around Silicon Valley, Dadich doesn’t believe there’s a tech bubble. “We’ve seen real bubbles before, but I don’t think we’re in that exact moment — but it’s easy to see where it could get out of hand.” Meanwhile, he views the interest in reporting on tech as a good thing, in particular “the support of ad partners willing to invest in the brands that power that journalism.”