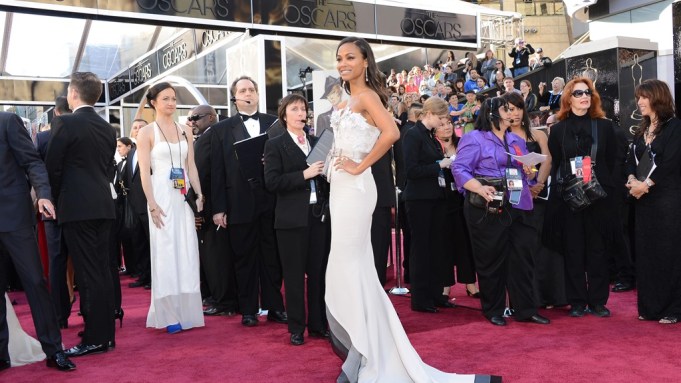 RED CARPET POWER: People magazine is out to channel the influence and power the red carpet has on consumers, fashion and brands, beginning with a pre-Oscar consumer survey. The publication will also be expanding its social media initiatives on several fronts, including a live online experience sponsored by Banana Republic to launch its True Outfitters campaign, and a Best Dressed tool that will allow consumers to immediately dress like the stars online and show off images to friends on sites like Facebook.

“The majority of women in the U.S. are interested in the red carpet — 65 percent, or 100 million women,” said Karen Kovacs, publisher of People. “We know she considers herself to be a trendsetter and she spends more than average on fashion and beauty.”

Kovacs noted that 85 percent of those surveyed called the red carpet the “ultimate girly experience,” while 80 percent described it as an “adult version of princess stories.”

Kovacs added that the red carpet has a significant impact on Millennials. “When we asked women how old they were when they first saw the red carpet, they said 16. It’s a time when they’re trying to find their individual style….This is the most inspirational moment for her. One of four women watch the Oscars with some [wireless] device and that device enhances her red-carpet experience.”

The magazine’s digital strategy has been accelerating since 2011 when it partnered with L’Oréal and its #getthelook campaign at the Screen Actors Guild Awards and Golden Globes. “Helping consumers get the look immediately is critical,” explained Kovacs.

On the Oscar front, People has also partnered with the Academy of Motion Picture Arts and Sciences to present the second annual Oscar Fan Experience. The event on Sunday will host 100 fans and 300 VIP subscribers and 300 of their guests to a full-day Oscar experience, which will include a red-carpet meet-and-greet with celebrities. There will also be a sweepstakes for a chance to win a seat at the Oscars, as well as a viewing party for the ABC-televised awards.