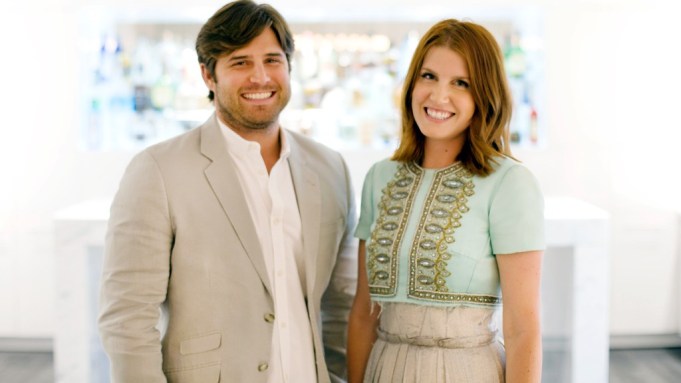 They talked about how to tap into the growing number of men reading blogs and discussed how online scribes in different regions or continents can collaborate to expand their geographic reach.

The two-day conference was organized by RewardStyle, a two-year-old platform for monetizing fashion and beauty blogs that already counts 10,000 publishers and 2,500 retailers — from Wal-Mart to Neiman Marcus — as clients.

“Based on April sales, we think we will drive more than $100 million in sales this year,” said Amber Venz, the 25-year-old blogger who founded the company here with her boyfriend, software engineer Baxter Box. “[It’s a] 200 percent increase, year over year.”

Gabrielle de Papp, vice president of corporate communications at Neiman Marcus Inc., said, “RewardStyle helps to bring blog publishers together with fashion brands to create affiliate and referral partnerships. Their relationships with a diverse group of influential fashion bloggers has introduced our brand to a broader audience beyond our core customer.”

The conference, Papp noted, was “a terrific forum” for discussing opportunities with far-flung publishers including Jessica Stein of Tuula Vintage and Olivia Palermo.

RewardStyle germinated when Venz showed Box the daunting spreadsheets of product codes she had to use to earn commissions from items that sold via her blog at Venzedits.com.

“I wanted to talk about any product I chose and to get paid when I sold it,” Venz said. “I realized there wasn’t a good solution for bloggers.”

With backing from friends, family and an angel investor, Venz and Box developed RewardStyle, a database that makes linking a product to an e-tailer as easy as clicking a button.

Bloggers, who must be approved by the network, view product images with the pay rates offered by various retailers and can click on an e-commerce affiliate for each item they feature. They can see that Bergdorf Goodman, for instance, pays an $89 commission on Alexander Wang’s $850 Diego Hobo bag, while Shopbop dispatches $119. They also can check if their blog generates more business via Bergdorf than Shopbop.

“We’ve been working with affiliates for eight years now, and she is the first one who is approaching it from a blogger’s perspective,” said Kelly Cook, a partner in Bagsnob.com. “It’s super easy, and she’s constantly upgrading.”

“The mobile app is essential for social media,” Cook noted. “Most people haven’t been putting affiliate links on social media because it was really hard.”

Venz declined to reveal the cut her company makes on sales, but an advertiser who’s thinking of signing up said she was offered pay-rate packages ranging from 7 to 30 percent, including bloggers’ commissions. The company flags advertisers in its newsletter beginning at 15 percent, while higher rates earn personal consulting.

RewardStyle also acts as an agent for bloggers, booking flat-rate posts, Instagrams and the like. It has a team of consultants advising bloggers how to maximize opportunity, and it supplies analytics, including activity by region.

The average click-to-sale rate is slightly less than 1 percent, Venz said, but influential sites like Manrepeller.com can do quite well.

“Of our top bloggers, many do make $30,000 per month on affiliate revenue alone,” Venz claimed.

RewardStyle’s publishers are sprawled throughout 50 nations and growing, and the start-up has recorded transactions in 130 countries, she noted.

“We had hundreds of French bloggers before we ever had a French retailer because they wanted to make money on U.S. sales,” she noted.

“It has grown year over year consistently,” said Scott Allan, senior vice president of global marketing at Rakuten. “We estimate that the [annual] amount of money spent on affiliate marketing by retailers, through commissions, will grow to $4.5 billion by 2016, most paid to publisher commissions.”

The company is doing a similar study in eight international markets including the U.K., France, Germany, Brazil and Japan, he noted.

“A lot of brands want to enter new markets…and [with affiliate marketing] they can promote products and reach consumers online without ever having a store on the ground,” Allan said, adding, fashion is one of the biggest categories — if not number one — in LinkShare’s network.