Rihanna to Star in Balmain Campaign

Slated to break in a range of January fashion titles, the ads were shot in New York by Inez van Lamsweerde and Vinoodh Matadin. 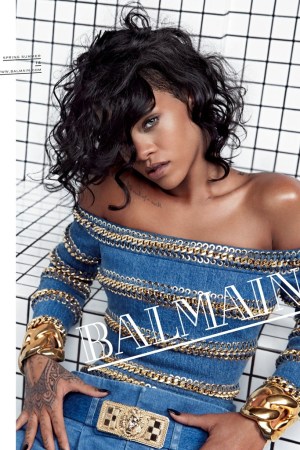 MONSTER MASH: Frequent Balmain wearer Rihanna is taking her love of the French label to the next level by appearing in its spring ad campaign, WWD has learned.

Slated to break in a range of January fashion titles, the ads were shot in New York by Inez van Lamsweerde and Vinoodh Matadin.

“In front of the camera, she makes you feel like she is the only girl in the world,” said Balmain’s creative director Olivier Rousteing, characterizing his casting coup as a dream come true.

“When the woman that inspires you wears your creations, your vision feels complete,” he added, describing the “icon” of his generation as uncompromising, fresh and modern.

Even with her hair obscuring part of her face, the pop diva — who appears with Eminem on the chart topping single “The Monster” — is unmistakable with her riveting gaze and signature tattoos.

Atelier Franck Durand took care of creative direction for the campaign, with styling by Mel Ottenberg.