Held on the 44th floor of Hearst Tower, the event honored five of the magazine's female readers, spanning five decades. 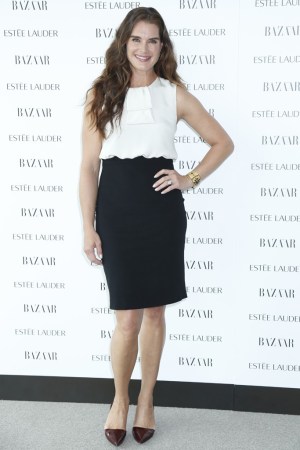 ROCK OF AGES: Who better than Brooke Shields to prove women can be fabulous at any age? “I’ve been around for decades,” quipped Shields at Harper’s Bazaar and Estée Lauder’s Fabulous at Every Age Luncheon on Tuesday afternoon. The face of Ivory Soap as an infant, Shields’ acting career certainly highlighted the theme of the event: ageless beauty and success. “I find that wherever I am I make the most of the opportunities and as long as I stay working and learning and growing, then it’s why I’ve been able to try my hand in many different mediums,” said Shields, 47, who just wrapped filming five episodes of “Army Wives” and is set to direct “Chicago” at the Hollywood Bowl this summer. “I’ve just said yes. I just keep saying yes to things I never would have thought I’d be doing, like directing.”

Mom to Rowan, 9, and Grier, 7, Shields, who lives in New York City, said life is busy but that’s how she likes it. “I always ask myself why not,” she said. “If I’m scared then I have to probably say yes. If I can find reasons why not to do something that’s probably when I have to do it.”

Held on the 44th floor of Hearst Tower, the event honored five female Harper’s Bazaar readers, spanning five decades, who embodied the theme of female empowerment at any age. The recipients were Jen Tam, 24, Norma Lujan, 38, Florence Wormser, 48, Teruko Laura Burrell, 54 — also the afternoon’s Grand Prize winner — and Karyn Calabrese, 66. “When I look back — I’ve been again around a long time — at the mistakes that I’ve made in fashion and in just my physical being — the biggest mistakes I’ve made have been when I’ve been trying to look like somebody else,” said Shields to audience members. “It was always when I would say ‘that’s me’ instead of ‘this is me.’ I think that we should just own what we see in the mirror with absolute confidence.”