The ceo’s first company-wide meeting dug into the publisher's business, now and in the future, with hopes of a new $1 billion revenue stream.

Condé Nast’s new chief executive officer is starting to put his stamp on the company.

In Roger Lynch’s first company-wide meeting at the end of last month, the new ceo tried to bring a more communicative style to his role, which he’s held for about four months. Although he quipped during the meeting that “it feels longer.”

Unsurprising since Lynch has been overseeing the broad reorganization of Condé as it fuses U.S. and international operations, organizing a just-revealed executive reshuffling, digging into the state of the publisher’s current business and holding a number of listening sessions with employees, including those in nine offices abroad so far, according to a video of the meeting seen by WWD.

From these employee sessions, Lynch said he heard a number of questions and concerns on the reorganization and what it means for the company and that he wanted to address them directly. He also gave some details about the current state of the company’s business and some insight as to where he sees it going.

Lynch seems most bullish on video, an area other company executives have been trumpeting as essentially Condé’s saving grace for a year, at least. He said the segment could eventually be a $1 billion segment for Condé, which would effectively mean doubling the company’s current estimated revenue. “When I joined, I knew we had good prospect to grow video and I only have more conviction in that today,” Lynch said. “We’re just scratching the surface.”

But that’s in the future. The immediate goal is still getting the company steadily profitable, something that is not yet a certainty, as Lynch told employees the company is not likely to meet internal projections for this year.

A graph without dollar amounts that only delineated “negative growth” in gray, showed Condé’s combined international and U.S. business spent all of 2017 operating at a loss, along with the first half of 2018, although the second half of the year ended up profitable. For this year, the company is estimating another dip into a loss for the first half, but again expects the second half to rise back into profitability. As previously reported, Condé’s 2017 loss in the U.S. amounted to about $120 million and 2018’s brief return to profitability in the second half was a better-than-expected result. Although the international business has been solidly profitable since the second half of 2018, the U.S. business has mostly operated at a loss at least since the start of 2017. The company’s estimates show it will remain at a loss for the first half of this year, but it expects to end it profitable.

Nevertheless, Lynch explained that the company does not expect to meet its current projections for this year. In the U.S., year-over-year revenue growth of 4 percent was planned, but the new estimate is only 0.3 percent growth for 2019. The ceo didn’t chalk the difference up to print declines — given the segment is actually ahead of plan — but “headwinds in other areas, like display [advertising], where prices have come down pretty substantially.” Europe, Middle East and Africa, too, is expected to miss revenue plans of 4 percent growth, now estimated to grow by 3 percent. But business in Asia-Pacific regions is expected to substantially beat a plan of 4 percent growth, estimated now to come in at 11 percent ahead. Although Latin America, a relatively small market for Condé, had ambitious 15 percent growth planned and is now only expected to come in at 3 percent growth, Lynch more than once in his presentation told staffers the area was one they should expect “more investment” in.

Given all regional disparity in Condé’s business, Lynch pointed out that “when you combine the [U.S. and International businesses] what you see is that together, this company is stronger. When one region is a little weak, the other is better.”

But the majority of revenue still comes from the U.S., which Condé estimated makes up 56 percent. EMEA makes up 28 percent; Asia-Pacific 15 percent, and Latin America only 1 percent. Lynch also broke down Condé’s biggest brands by revenue. Vogue came in at the top, bringing in 28 percent of the company’s revenue; GQ was next at 13 percent; The New Yorker and Vanity Fair each bring in 10 percent; Architectural Digest and Wired each bring in 6 percent; Glamour. Bon Appetit/Epicurious and Allure each 5 percent, and Condé Nast Traveler at 4 percent. The remaining 8 percent of revenue comes from Condé’s digital-only brands, like Pitchfork and Self, a brand Lynch touted as becoming profitable again since it’s life in print ended. 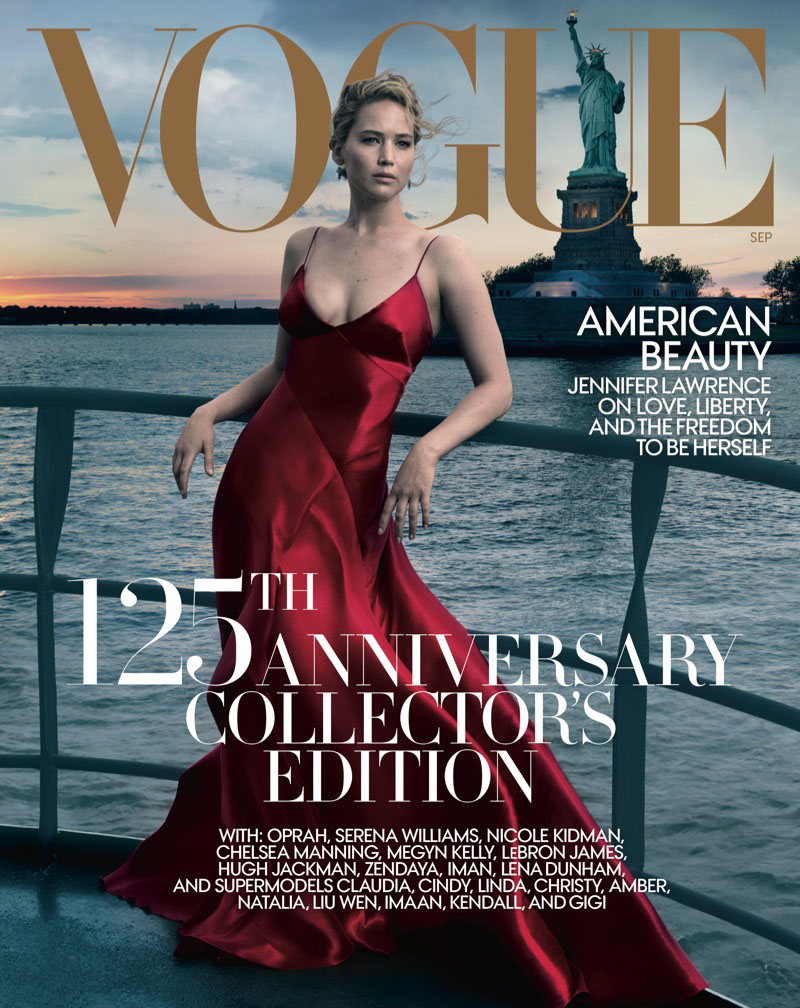 Vogue is Conde’s biggest brand by revenue, according to Lynch.   courtesy

Speaking of print, revenue from the segment has declined 15 percent since 2017, when it still counted for 50 percent of Condé’s business. It’s estimated to be 36 percent of business this year, but Lynch insisted that growth in other areas has made up for the decline. Web advertising is estimated for 2019 to be 24 percent of the business; video, 11 percent; consumer, 18 percent, and “other” at 11 percent. Other includes things like Allure’s Beauty Box and live events.

The takeaway from this breakdown for Lynch is that “the cornerstone is our editorial excellence and audience…without that core foundation we don’t have a business.” But he did note a “need to monetize the consumer engagement we have.”

“We really have tremendous consumer engagement globally and it’s growing,” Lynch said in the video. “Some [areas] don’t monetize right now as well as print. This includes video and audio, which is a big opportunity for us, and direct-to-consumer, and a food expansion. We think there’s a global opportunity for us to expand what we’re doing in food and b2b.”

Condé has already launched Vogue Business and AD Pro, only the latter of which is on a subscription model. Something Lynch did not mention was Condé’s previously announced plan to put all of the publisher’s web content behind a paywall by the end of the year. This was a plan revealed before Lynch joined the company, but one touted at the time as a “gamechanger.”

More than the state of Condé’s business, staffers were most interested in the prospect of layoffs. During the meeting, Lynch addressed five questions that were the most “upvoted” and the number-one question was about staff cuts, something that Lynch was clearly not surprised by but oddly drew a laugh from the staffers in New York that he was speaking to in person. Layoffs at Condé have come basically on a rolling basis for the last several years as the company looked to drastically cut costs in an effort to stem financial losses. Lynch admitted that with the reorganization “there may be some roles that are duplicative” but promised that if the time does come for layoffs, “we’ll be open and transparent in how we deal with that.” The budget process for 2020 is just getting underway.

Staffers also asked things like what other companies Lynch sees as inspiration (Netflix and The New York Times), the prospect of improved maternity leave (the current policy is under review), whether there are any acquisitions planned (no, but the company board has said there is money for acquisitions once the company is reorganized and stable).

Watching Lynch speak to staff, it seems clear that he’s trying to cultivate a new, more open era at Condé. He pushed for more questions from staff and said these mass meetings will be quarterly, and that he intends to visit all 32 of the publisher’s markets by early next year. Under previous ceo’s Bob Sauerberg and Chuck Townsend, meetings were much less frequent and typically only held with individual brands and focused only on their individual businesses, not Condé’s as a whole.