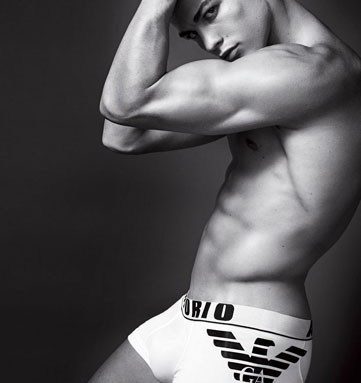 The black-and-white images were shot on location in Madrid by Mert Alas and Marcus Piggott, and will break in sports, fashion and lifestyle magazines in February. Ronaldo will also appear on billboards in main cities around the world.

“Cristiano is a great-looking man with the perfect physique of an athlete,” said Giorgio Armani. “For me, he is the essence of youth — spontaneous, exciting, a real maverick. It is for his energy that I have chosen Cristiano to become the new face of Armani Jeans and Emporio Armani Underwear — for his youthful, exciting and, yes, sexy attitude.”

Ronaldo said he was “very flattered” to represent the designer’s brands and described the pictures as “certainly striking” and “full of an attitude and spirit that I can relate to.”

In addition to Beckham, Armani has over the years dressed many of the world’s top soccer stars including Ronaldo, Luis Figo, Thierry Henry, Christian Vieri, Fabio Cannavaro, Andriy Shevchenko and Kaká. The designer broke ground in 1996 when he selected the first soccer player, David James, to front the Armani Jeans campaign. Since then, Shevchenko and Kaká have also modeled for Armani. More images are posted on the Armani Facebook page.

NEW HIRE: People StyleWatch has tapped Kate Dimmock as its first fashion director. Dimmock comes to StyleWatch from Town & Country, where she held the same title. She has also served as fashion director at Shop Etc. and market director for Marie Claire. The new position was created to accommodate the magazine’s growing fashion needs. “StyleWatch is into its third year as a monthly magazine, and we’ve really grown since our launch,” said editor Susan Kaufman. The Time Inc. title ended 2009 with a 24 percent increase in ad pages, according to Publishers Information Bureau.

CUTS AT MEREDITH: Meredith Corp. on Thursday disclosed plans to lay off 45 people in its special interest media group, and most positions affected are at the company’s headquarters in Des Moines. A spokesman noted the downturn in the housing marketplace has negatively impacted the special interest sector, typically a cyclical business. Magazines in this group provide information on subjects such as health, home building, remodeling and decorating. The company will record a special charge of $5.5 million for the second quarter, related to severance and other costs.