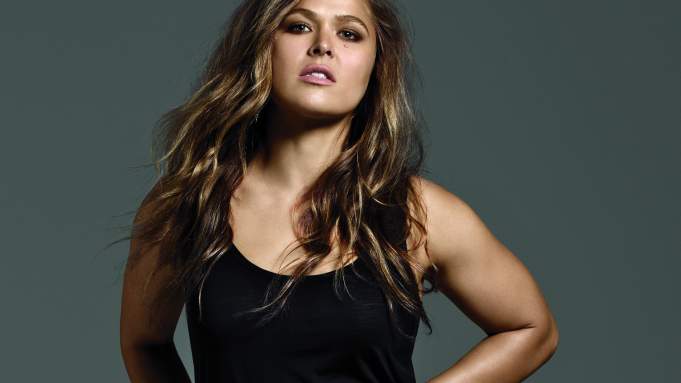 Ronda Rousey is showing a different side of herself in a new fall ad campaign for Buffalo David Bitton.

It’s a stark contrast to her first ad campaign for the label owned by Iconix Brand Group. When the mixed martial artist embarked on her gig as Buffalo’s brand ambassador two years ago, New York-based Iconix chose to photograph her with a sexy, edgy look — usually barely clothed in the company of a shirtless male model.

For the latest images, to be released Wednesday, Iconix returned to Los Angeles, where Rousey lives a fit life in the beachy neighborhood of Venice. Photographed by Brooke Nipar, a veteran of ad shoots for Iconix’s Material Girl brand, Rousey often sat barefoot in front of the camera when she didn’t jab the air with quick punches between shots. The entire time she sported jeans in an array of clean, distressed and embellished washes from the Hope line, which integrated her suggestions for creating comfortable but flattering jeans for curvy, athletic women.

For instance, the skinny jeans she donned in her first ad campaign felt too tight around the calves. Serving as a sort of in-house fit model, she told Iconix that a lot of women who are athletes or have fuller figures can’t wear skinny styles comfortably without sensing that the denim restricted their legs. “I’m an active person,” Rousey said.

Buffalo listened, designing skinny, boot cut and straight legs with a contour waistband out of ultra-stretchy fabric blended from cotton, polyester, viscose and elastane. Now, Rousey said, “I don’t have to sacrifice comfort for looking and feeling good.”

To show consumers how exactly she stays active, Buffalo and Rousey are sponsoring a social media sweepstake that allows the winner to meet the 29-year-old athlete in her training gym in Southern California.

“She’s a very unique star,” said Vinny Nesi, a senior vice president at Iconix. “She has an appeal as much to males as to women. Obviously, the guys are fans of hers because of the sport and arena she plays in and she’s an attractive young lady. She represents a voice in the female empowerment movement.”

Rousey comes across as more than a celebrity spokesmodel for Buffalo. She also gives it an opportunity to balance the increasingly uneven ratio between its men’s and women’s sales. In the last four years, the women’s side has seen its share slip to 20 percent from 40 percent in comparison to the men’s business, Nesi said. Buffalo has taken steps to correct the discrepancy, such as opening a denim bar stocked with women’s jeans at Macy’s this year.

As proof of its devotion to the women’s market, Nesi said this campaign’s budget is “considerably bigger” than the first one that featured Rousey. He declined to disclose specific figures. The ads are set to run in magazines such as Cosmopolitan. Rousey also will be making her first appearance at Project in Las Vegas to meet with Buffalo’s retail buyers at the trade show.

“Ronda exudes confidence wherever she goes,” Nesi said. “We aggressively want to build the women’s business.”