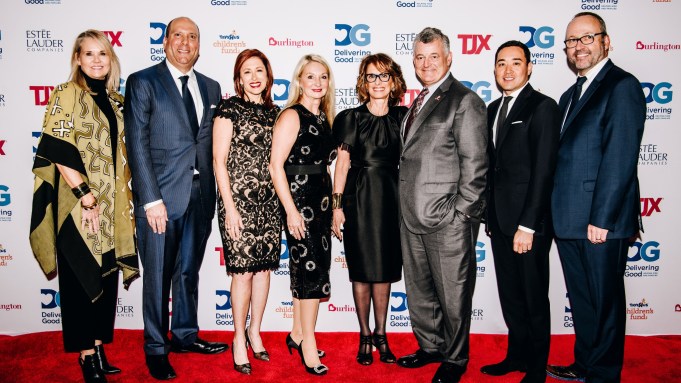 Delivering Good raised more than $1.4 million at its annual gala Wednesday night at the Ziegfeld Ballroom in New York.

The event’s theme was “Reset,” giving women, men and children an opportunity to reset their lives and set a new course after suffering major setbacks.

“Many of the people that we help simply need a reset, whether it be a permanent home, a new job, new clothes, toiletries, cosmetics, a warm coat or dry socks. To us these are basics. To them, they are actually ingredients necessary for a new beginning, a new start, a new direction, a reset,” said Andrea Weiss, board chair of Delivering Good, who kicked off the ceremonies with Lisa Gurwitch, president and chief executive officer of Delivering Good.

The event honored Rose Marie Bravo with the Lifetime Achievement Award, which was presented by William Lauder, executive chairman of the Estée Lauder Cos. Daniel Milberg, president of Milberg Factors, Inc., received the organization’s Vanguard Award, and Shinola, which was presented its award by Lauren Bush Lauren, took home the Company of Change Award. The One Million Pairs of Socks campaign was also honored with the Delivering Good Impact Award. Ken Downing, chief creative officer of Triple Five Group, which is developing the American Dream mall, served as emcee. The Young People’s Chorus of New York City performed.

“Rose Marie Bravo is an extraordinary executive of tremendous accomplishment. She’s been one of the most, if not the most, important mentors to me in my career,” said Lauder, who explained that he started his career at Macy’s under Bravo’s tutelage. A few years into his career, she said to him, “You’re moving to Dallas.”

“It was a transformative experience for me and my career, and I thank you for pushing me,” said Lauder.

Downing also said that 15 minutes after meeting Bravo, while he was working at I. Magnin in Seattle, she sent him to San Francisco. “I guess Rose Marie’s M.O. is sending everyone to another city. My career exploded after I went to San Francisco.  I owe my success to her,” said Downing.

Bravo, former ceo and vice chairman of Burberry who serves on the board of Tiffany & Co. and Estée Lauder, said she was humbled by the honor. “A big shout-out to Estée Lauder and Tiffany in coming forward in such an amazing way in support of this amazing cause,” she said. Bravo thanked Lauder and said they’ve known each other four decades. “Can you see what the Estée Lauder creams and lotions do to us?” she said.

Striking a serious note, Bravo said, “The Bible tells us to whom much has been given, much will be required. It’s a constant reminder. I’ve had a blessed life in almost every conceivable way. In fact, most of us have. To give back is part of what we do, and what we must do.”  She said the retail, apparel and beauty industries “have a huge heart for giving,” and is one of the reasons she’s loved her chosen career.

Downing said that anyone who knows him knows that he knows very little about sports. “I was born to be in fashion. I actually had an uncle who was a running back for the Philadelphia Eagles in the Forties, and he would take me to football games to shake the silly out of me,” said Downing. “The silly never got shook out and people like Rose Marie Bravo found me and let me know my cause in life,” said Downing. “But I loved my Uncle Ernie.”

“I’m very fortunate. I grew up in the analog world when things didn’t move so fast and problems weren’t as big. From an early age, as a family and community, you helped your fellow man. It was ingrained in my DNA. You did the right thing and you had a social conscience,” said Milberg. “I love that Delivering Good unifies all of us in the apparel world, whether we’re competitors in business, or partners on a deal. We all work together to serve the community and people in need.”

When one considers sustainability and preserving the earth, Milberg said that instead of a company disposing merchandise that ends up in landfills, they now have an outlet that delivers it to people who need it most.

In presenting the award to Shinola, Lauren Bush Lauren, ceo of Feed Projects, said that Shinola opened its doors in Detroit when other doors were closing. “They opened up a world of possibilities and opportunities for their local employees. They provide job-training skills and empowered so many who would not have this opportunity…it gave such life to a city that was truly shutting down,” she said.

Shannon Washburn, president of Shinola, said, “I want to thank the city of Detroit, which from Day One, embraced our company and made us feel part of the community….It contributed to our story and contributes to our continued success. Being a part of that city is something that inspires us, and makes it easy to give back to the city that has given us so much.” Shinola was founded on creating 100 meaningful manufacturing jobs in Detroit. “As of today, we have 500-plus employees.”

Finally, Stephen Lamar, incoming president and ceo of the American Apparel and Footwear Association, and Isaac Ash, president and ceo of United Legwear, accepted the Good Impact Award on behalf of the One Million Pairs of Socks Campaign. Among the companies that have contributed are United Legwear, Ascena, Bombas, Happy Socks, Gold Medal International, Burlington, Ralph Lauren, Global Brands Group, G-III, Kidbox, and Macy’s. Socks are the most requested article of clothing in homeless shelters. Ash, who spearheaded the campaign in 2016 to rally the legwear industry, said, “I truly believe that unless we are all giving back in our communities, then we’re not doing our jobs.”

Lamar said the campaign has donated just shy of six million pairs of socks and distributed them with the help of Delivering  Good. On the spot, Ash donated an additional 200,000 pairs of Puma socks to bring the grand total of socks that have been collected to six million.

Overall, Delivering Good helps more than 2.5 million people each year in the U.S. and abroad. More than $2 billion of donated products from fashion, home and children’s companies have been distributed through the Delivering Good network of local community partners since the organization’s inception in 1985.