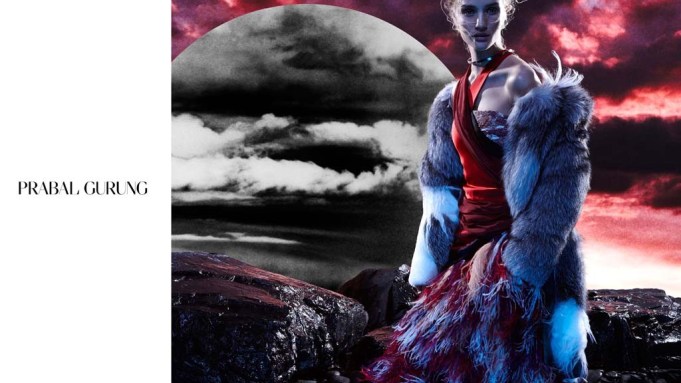 PRABAL’S PASSPORT CONTROL: With his company’s fifth anniversary within reach, Prabal Gurung has tapped the globe-trotting Rosie Huntington-Whiteley to give his fall ad campaign an international spin.

Shot by Daniel Jackson against a mountainesque set made by Gerard Santos, the English model-actress took on the role of an international luxe traveler, albeit a well-grounded one. Noting that the backdrop was built, not Photoshopped, Gurung said this season’s headliner also has an authentic appeal. Having known Huntington-Whiteley since his days at Bill Blass, when former creative director Michael Vollbracht cast her in a runway show, Gurung has kept an eye on her carer. “I’ve seen her progression and how she’s moved on,” he said. “What I like is that she hasn’t limited herself to being just a model. There is a factor about her that she wants to try — she wants to go for it — and I like that.”

The idea of bridging and exploring different worlds resonated with Gurung, whose own life started in Singapore with stays in Nepal, India, London and Australia before landing in New York. “As the business is growing exponentially, I wanted to focus on someone who has a little more of an international appeal,” Gurung said.
The fall campaign was finessed by creative director Chris Simmonds and stylist Elin Svahn, a former assistant of Karl Templer.